MAP05 is the fifth map of Dystopia 3. It was designed by Anthony "Adelusion" Czerwonka and Iikka "Fingers" Keränen and uses the music track "". 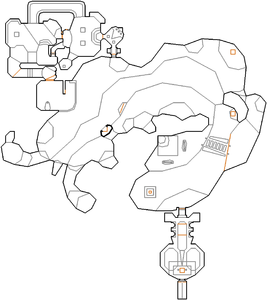 If you're loaded for bear from the previous three levels, you're in good shape. However, done solo from a pistol start, this level features one of Dystopia 3's nastiest openings that will test your ability to evade enemy fire and instigate monster infighting until you find some good powerups and weapons to equalise the odds.

You start in a small cave that opens up into a large cavern with an underground river. Turn around and collect the box of ammo, box of shells and box of rockets - you will need them. When ready, head out into the cavern and prepare to make a run for it. Shotgun guys will take potshots at you from across the river, imps and revenants will harass you from both sides and cacodemons will use their flying nature to attack you from unexpected angles. To survive from a pistol start, you need some health and better weapons. A suggested course of action is as follows:

With an effective weapon, you can now progress the level. Follow the near side around until the ledge you are starts to narrow. In this next area, you will encounter up to three demons. On Hurt me plenty and above, one is positioned to body-block you in the narrow part of the ledge. Continuing forward, you will find a stone square with up to three imps and a rocket launcher. A mancubus (two on Ultra-Violence and above) will begin firing on you as well. On Ultra-Violence and above, a pain elemental is likely to teleport in as well. The trick is to get the mancubus to fire on all the monsters, allowing you breathing room to grab the rocket launcher. Once the mancubus is done immolating the rest of the monsters for you, thank it with a few rockets to the face. You should clear out their ledge, as you will be teleporting there later.

Once done, head over the bridge in the east to the far bank. With your weapons, you can turn the tables on the monsters with strategically placed shots. Head west and clear everything out (don't forget to grab the shotguns from the dead shotgun guys).

The Base (Yellow and Red Keys)

In the north of the far bank, you will find a new entrance into a base. Kill the shotgun guy at the entrance. As you walk further into the entrance, a chaingunner will appear in the cages to either side - quickly pick them off. This leads into a small room with the yellow key behind bars. Kill the zombieman and any shotgun guys here, then head west into the next room.

This next room has up to seven shotgun guys waiting to attack you from multiple directions - peek and clear them out progressively. Do beware of the revenant (two on Ultra-Violence and above) in the north-east corner. Head to the southwest to get a chainsaw and another badly needed soulsphere. Go through in the tunnel in the north with some zombiemen and shotgun guys, which takes you a large room with two separate platforms. You will also encounter chaingunners here on top the other two varieties of former humans, so be careful.

Head up the steps to the left (east) platform and follow it around to a door. Open the door and go through to access the platform with the shotgun guys in the previous room. Flip the switch in the north to unblock the yellow key in the room to the east. However, to get there, you have to brave a small crusher. Time your entrance and exit carefully when collecting the yellow key.

Head back up onto the shotgun guys' platform. You can now open the yellow door. This takes you to a ledge with a berserk pack and a switch. Flip this switch to raise the floor between the two separate platforms (you can strafe-jump here without the yellow key). Drop back down, head up the steps, cross over to the west platform and follow the corridor around to a door. Open it to access a green room that may have some shotgun guys. This room contains a tough fight. Shortly after entering it, Up to two barons of Hell and two lost souls will teleport into the room. Carefully dance around them, then flip the switch in the northeast. This causes the red key to appear on the pedestal in the south-west. Grab it and quickly leave this room.

Your next task is to backtrack to the cavern. This is a simple task, except for one piece of advice - don't try to rush through both crushers in the yellow key room in a single dash. You are unlikely to make it out unscathed. Instead, pause near where the yellow key was, taking one crusher at a time.

A teleporter will have appeared in the east. Step onto it to be teleported to the ledge where the mancubus was. Open the door ahead and head through. Be careful - once this door closes, you cannot open it again. This final room is full of traps:

Use everything at your disposal to get out of this sticky situation. You can pop out of the room after having awaken all the monsters and kill them safely behind the red door. Step onto the recessed exit pad to end the level.