MAP06: Alpha Quadrant is the sixth map of Doom 64, designed by Danny Lewis. The level introduces barons of Hell and pain elementals. The level is of medium size but contains multiple platforming puzzles. It also contains one of the most deadly traps in Doom 64: in a large, American football-shaped room, the player must run across three platforms to reach a switch at the end of the room. However, if the player falls off one of the platforms, they will fall into a dark pit filled with many spectres. The level uses the music track "Bleep Spawn". 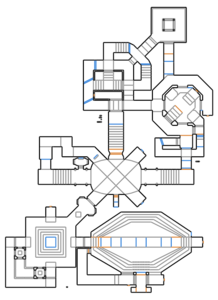 Map of Alpha Quadrant
Letters in italics refer to marked spots on the map. Sector and Thing numbers in boldface are secrets which count toward the end-of-level tally.

You start Alpha Quadrant in a small room with a door that leads to the first hall of the map, with a large square portion of the ceiling hanging down toward the floor. In the middle of the floor sits a shotgun. Picking it up spawns a few nightmare imps on the platforms above. Shooting them will also alert nearby cacodemons, Hell knights, and a baron. Dispatch them all and then head into the elevator corridor to the right of the start point.

As you approach the lift, a "service access channel" will open to the left side of it where you can enter as the lift rises. There is a stimpack, a box of shotgun shells and a super shotgun lying in wait inside. Continuing through this path will serve as an alternate route to take the monsters waiting for you at the top of the previous lift. Alternatively, you can skip the channel and continue on as normal.

After the elevator, there will be a long, curving corridor surrounding a large room with sergeants lining it. Mow them down using the chaingun until you reach the end where there is a switch. Activate the switch and the door to the large room will open up. Inside the large room you will see two raised platforms and a switch on the far wall. Activating the switch will trigger the appearance of a pair of Hell knights on the platforms. Kill them and bridges will raise to gain access to the platforms. One will have the yellow key card. Collect it and move back out into the curved corridor.

A complex of corridors branch off from the curved corridor which is infested with imps, Hell knights, sergeants, and barons, and at the end of that is a square cage with an opening that houses a megasphere (see the secret section below to find out how to get it). Traversing this portion of the map is not crucial to its completion, but it is necessary to obtain 100% kills, items, and secrets.

After collecting the yellow key card, make your way back toward the map start and this time head into the other elevator corridor, killing the lost souls along the way. There is a switch at the top that could not previously be activated without the yellow key card. Activating the switch will raise a bridge that would allow you to cross, but the aforementioned square portion of the ceiling blocks your path. After the bridge lowers, a small niche opens up in the elevator corridor for the bridge that gives you access to a switch that causes the square portion to recess into the ceiling, thereby allowing you to cross. Crossing the bridge takes you to a platform with another switch, which changes the bridge configuration that takes you to another platform with another switch, which raises a bridge that takes you to the second main portion of the map.

The second main portion of the map consists of a large yellow room with a recessed step-down floor, and is infested with imps, nightmare imps, spectres, and a baron. When you step on the middle of the floor, it raises up allowing you to jump to various portions of the room. Use it to jump to the platform where the baron was and activate the switch. This will open the door to the large and dangerous football-shaped pit room.

In the football-shaped room, use the rocket launcher to dispatch the two initial barons waiting within on the pillars, while being careful of the pain elemental and its lost souls spawning in after the second baron is killed, for which you will need to switch weapons. All the while, the constant sound of roaring can be heard from spectres in a sealed off corridor off to the side of the pit. After dispatching the barons and pain elemental, you will need to make several leaps of faith across the three pillars that will slightly raise up as you jump on them toward the switch at the far end of the pit. This will open a door in the yellow room from before that houses the blue key card.

If you fall into the pit, a horde of spectres will spawn when you reach either ends of the pit and since the pit is very dark, they will be nearly impossible to see. Fight your way out if you spawned them, a chainsaw and a super shotgun will work wonderfully here, and your reward down there is berserk pack and a few shell ammo and box of bullets pickups. The only way to escape this is to climb an extremely narrow set of stairs leading back to the portals.

After collecting the blue key card, return to the first main part of the map and open the blue door. Three barons will emerge behind the door and attack. Dispatch them first and then enter the blue door, taking the elevator to the exit switch.

In the corridor that wraps around the room where you get the yellow keycard, the best weapon to use against the line of sergeants is the chaingun to mow them down.

Using the secret corridor to access the megasphere, you can navigate the complex corridor and take out all enemies from back to front. Beware the rocket launcher pickup triggers extra imps and Hell knights.

The spectres in the bottom of the football shaped pit room will only spawn if you traverse one end or the other. They can be easily eliminated with either the super shotgun or the chainsaw.