MAP06: Anomaly Entrance is the sixth map of Bloodstain. It was designed by Pavel Tvrzník (Pipicz) and uses the music track "Rage," originally composed by Sascha Dikiciyan (Sonic Mayhem) for Quake II, sequenced to MIDI. 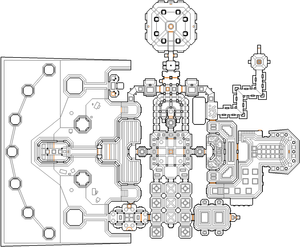 Map of Anomaly Entrance
Letters in italics refer to marked spots on the map. Sector numbers in boldface are secrets which count toward the end-of-level tally.

Up to five cacodemons cannot teleport into the map. This is because the teleport destination (thing 481), where they are supposed to teleport is not on the sector with the matching tag (tag 39).

* The vertex count without the effect of node building is 6628.