MAP06: Assault on the Mountain Garrison is the sixth map of Doomworld Mega Project 2017. It was designed by Pegleg. 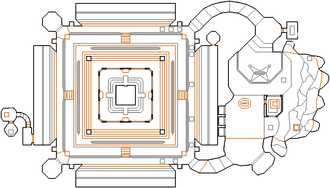 Map of Assault on the Mountain Garrison
Letters in italics refer to marked spots on the map. Sector, thing, and linedef numbers in boldface are secrets which count toward the end-of-level tally.

A large number of multiplayer-only Things have no flags set for any of the three difficulty classes, so they do not actually appear in the level:

Also, four deathmatch starts (12 through 15) have no skill flags set either, but because of special handling in the engine they function normally in the level.