MAP06: Athenaeum is the sixth map of Hexen Upstart Mapping Project. It was designed by Walter Confalonieri (daimon) and uses the music track "Level" by Kevin Schilder. 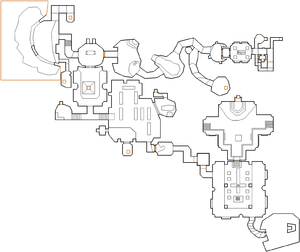 Map of Athenaeum
Letters in italics refer to marked spots on the map. Sector, thing, and linedef numbers in boldface are secrets.

Go up the steps to a room with ettins then walk through the east doorway to find a passage leading to a room with two stained-glass windows. Break the windows to find Dragonskin Bracers and (depending on player class) Frost Shards, Timon's Axe or a Serpent Staff, then open the east door to reach a cavern with more ettins and a green chaos serpent. Drop down the hole in front of you and follow a tunnel east until you reach a stone door guarded by ettins and a slaughtaur; when you try to use the door you will find it is locked, but this will cause glitter bridges to appear over a pit behind you. Cross the bridges and follow another tunnel to a teleporter guarded by a centaur, enter it then follow the path south until you reach a crawlspace; crouch down to get through here, collecting a Boots of Speed on the way, then head north to find a minotaur switch - pull it to open the stone door you saw earlier.

Enter the nearby teleporter to get back to the glitter bridge area where some ettins have appeared, then head through the stone door you just opened to find two ettins guarding a table with a trident on it. Continue east to another minotaur switch and pull it to lower a wall behind you, revealing another teleporter guarded by an afrit; the teleporter will send you to a hall with a Korax statue, but do not look at it for too long as several ettins are approaching. Go up the staircases on either side of the hall to reach the upper walkway and follow it south to another minotaur switch, which you can pull to reveal another teleporter elsewhere in the map, then go back to the first floor and open the door behind the statue to enter a large room with a chain switch guarded by ettins and a slaughtaur, plus two dark bishops on medium and hard skill levels. Pulling the chain switch will lower a barrier in MAP02: Garden of Torture, allowing you to reach the next portal.

Return to the statue hall and enter the teleporter in the north wall, then retrace your steps to the starting room and enter the small doorway in the south-east corner to find another teleporter. Enter it then turn left to see the wall you opened earlier; behind it is a Banishment Device and another teleporter that leads to a small chamber with two ettins who are guarding a minotaur switch. Pull the switch to open a door nearby, then go back to the starting point - passing some more ettins that have spawned - and enter the teleporter here to confront an afrit (plus two ettins on hard skill levels). Head east up and down two sets of steps to find some bookcases over a deep pit, then carefully jump across the bookcases to get to the south-east corner where you can pass through the door you opened earlier. Head east past some ettins to a square chamber with a green serpent; the floor will lower to reveal a tunnel that leads to the upper level of the room with the chain switch. Go up the steps in the south-east corner to find two green serpents guarding a portal leading back to the Garden of Torture.

The (absence of) data was last verified in its entirety on February 19, 2022.

* The vertex count without the effect of node building is 1415.