MAP06: Baron's Lair is the sixth map of The Plutonia Experiment. It was designed by Dario Casali and uses the music track "Sign of Evil" from Doom.

This level was also ported to PlayStation Final Doom as MAP28: Baron's Lair. 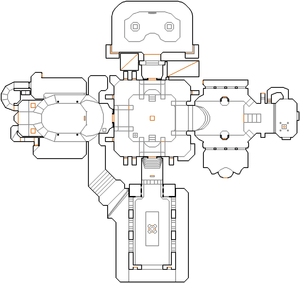 Map of Baron's Lair
Letters in italics refer to marked spots on the map. Sector, thing, and linedef numbers in boldface are secrets which count toward the end-of-level tally.

First go to the western door (black flagged), open it and kill the teleporting revenants, there is good stuff at left or right if you want it. Go down through the stairs to the small arena, press the metal switch, it will open two doors at your left and right with arachnotrons. At the northern trap there is a door, at the opposite direction of the door is a switch, clicking it will open the door. Go up through the stairs and take the red key, step over one of the teleporters and get back to the lair.

Go to the north-east door (red flagged) and open it, you are forced to fire the barrels creating a sound for hidden monsters which will teleport. Shoot the barrels around the blue key and take it, go back to the lair.

Go to the south-east door (blue flagged), and press the switch, revealing demons and revenants. After dealing with or ignoring them, go to the edge of the room, and press the two switches, one opens the door you came from, and another opens the last door.

To kill the cyberdemon, go up the stairs and to the side; its rockets hit the walls. To open the exit, flip the switch where the cyberdemon started, then the two platforms in the middle of the room lower. You have to flip both to open both exit doors. After flipping go to the stairs and finish the first part of the game!

If you walk under the skull cube at the start of the level, a super shotgun, chaingun, rocket launcher, and plasma gun will appear in your inventory. In a cooperative multiplayer game, an extra plasma gun will be underneath the cube, and the weapons will be given to all four players if one player goes under it (unless in altdeath mode).

This level uses a voodoo doll effect to make several weapons magically appear in the player(s)' inventory at the start of the level. When a player walks under the skull cube, the cube's linedefs (277-280) activate an off-screen elevator (sector 59) which drops voodoo dolls of all four players, standing right on the edge of the platform, onto a pile of weapons exactly 20 units (4 units more than the items' hitbox height) underneath them. This causes the dolls to collect the weapons, which are then given to the real players as if they had picked them up themselves.

Dario Casali described this map as "non-thematic pieces glued together into a central hub. Just sort of basic trap ideas I had, or room ideas that I had, kind of . . . one on top of the other." He highlighted the aesthetic disparity between the various sections of the map, exemplified by the balcony in the red key room overlooking a later, much different section of the level.[1]