MAP06: Bitter Loathing is the sixth map of the Newdoom Community Project. It was designed by Trevor Primmett (iori). 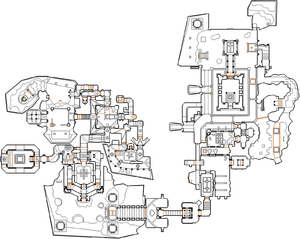 Map of Bitter Loathing
Letters in italics refer to marked spots on the map. Sector, thing, and linedef numbers in boldface are secrets which count toward the end-of-level tally.

The switch behinds you lowers the floor and into an outdoor area. The castle ahead has red inverted crosses. Since it is marked red, you cannot enter this door until you obtain the red key, so take the teleporter, winding up in a hallway inside of the castle. Mind the crushers as you make your way to the super shotgun and the red key. Grabbing it traps you in with cacodemons ambushing you from the sides. To get out, a switch on the east wall is revealed so shoot it. You cannot enter the teleporter near it yet, so head back to the other teleporter. Now with the red skull key, you can formally head into the castle. At the fork, go left and hit the switch to open a wall next to you. Take the lift up and hit the switch on the ledge where the mancubi where. Now go back to the teleporter at the bottom of this outside area, maneuver through the crushers and the next teleporter should now be accessible into the canal below where the super shotgun was (alternatively, you could reach both Secrets 1 and 2 getting a soul sphere in the process). Press the switch next to the gate and go back through the teleporter. The hall to your left should now be open. Go through it, and press both switches at both ends to remove the bars blocking the way further on. Follow this hallway all the way until you find a switch, this raises the gates in the canal.

Now go back there and down the marble lift into a room with a rocket launcher in the middle. Hit either switch and go through the passage until it blocks you off. Backtrack to the previous room to find a new switch. This opens a room in the east passage with another switch. Hit this one and it opens up a hall in front of you, but back near the marble lift. Follow it into a large room with a baron of Hell in the middle of the fountain. Walk to the metal column in the back. This opens up two passages in the hallway, and going back lowers lifts up to the balcony overlooking the fountain. Go all the way to the end of both passages, and switches will appear on the metal column. Shoot both of them to lower the barricades barring access to the column. Now get to ground floor and walk towards the column and it will lower revealing a switch. Use it and go to the room with the rocket launcher and a door south will be revealed, taking you to another rocky outdoor area. The switch on the west side of this area lowers bars to the door to the east. Go through two doors here and you will reach an important nexus. You have a choice of two teleporters. Take the one on your left first to emerge into a new area.

You do not have much choice in this area, so just go all the way through the hallways and down to the canal, being careful of monsters along the way. When you lower the faceted lift, go through it instead of riding the lift, to an eye switch. Hit this and go back to the faceted lift and ride it up and go east. There is a fork here, the left path leads to the blue skull key, but it is not accessible yet so take the right path. Follow this path to a switch, watching out for embankments where mancubi will eventually teleport. Hit the switch and return to the faceted lift to find the next set of bars lowered. You will be on the exterior wall of the small fortress. The two eye switches on the perimeters here open the way inside. Once inside, go through until a switch which finally lowers the blue key. The key will be on the same level as the canal, but just make sure you get it. Now you need to backtrack all the way to the teleporter that got you into this separate area. You will find that it is now barred, but there is an open area that is open leading to another yard with the yellow door. The switch here raises the bars so you can use the teleporter.

Once back at the nexus where you can choose two teleporters, go through the other one. This one takes you back to the outdoor area at the beginning, on the ledge where the mancubi where. A blue switch exists here, so press it and approach the barriers to the next teleporter and they will open. Taking the teleporter leads to a room within the canal overlooking a room with Hell knights. The switch here opens the door to that room, accessible from the courtyard you were previously in. Backtrack there, and go down the hallway taking the lift down. The yellow key is visible here, along with a switch. Hit the switch, then backtrack to the nexus to find a few imps and the bars open. The switch inside raises stairs to the yellow key. Be sure to watch out for barons once you grab it. Now go back to the courtyard and open the yellow door to exit.

* The vertex count without the effect of node building is 7324.