MAP06: Central Processing is the sixth level of console versions of Doom, based on the original E1M6: Central Processing with modifications made to adapt to consoles' limitations. It was converted by American McGee and originally designed by John Romero. The map first appeared in Atari Jaguar version, and is furthermore used in the 3DO, Sega 32X, Game Boy Advance, Sony PlayStation, and Sega Saturn versions.

The Sony PlayStation port introduces a Nightmare spectre on HMP and lower. 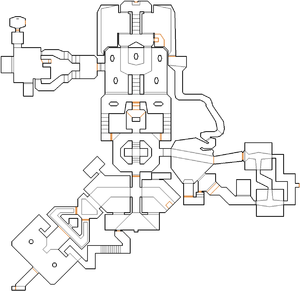 You start in a room in which various items and stimpacks can be found. This room also has two windows through which you can overlook two identical nukage areas. First, take a shotgun to the left of you as you start (west of the room). If you want, you can knock off the enemies through the windows. Then, head to the northern corridor toward the door but do not enter it yet. Turn right (east) and enter the first nukage area with the red keycard seen next to the wall. Take the keycard and prepare to fight with a group of demons behind you (depending on skill level and the port of the game, nightmare spectres can also be present).

Now, with the red key go to the western nukage area. To the left of you there are two red doors. All they lead you to the blue keycard. Once you can obtain the key prepare for an ambush again. Taking the key will open a small room with imps and a demon (you can also explore this room for two stimpacks). If you want you first secret drop to the nukage next to the key.

Return to the door you seen first in the start. Enter this door. You will be in a computer room, which you also may explore for useful items, such as green armor. In this room, go to the eastern nukage area with a bridge. Here you can shoot imps in the window and on a raised platform. Cross the bridge to the eastern side and open the blue door. You are now in a maze which consists of two square rooms with nukage and tunnels connected to these rooms. Enter the tunnel in front of you and follow it but do not overlook a switch to your left. You need this switch to unlock the yellow keycard room. Once you found a switch and activated it, follow the tunnel further until you discover the second square room. To the west of this room is the unlocked room. Ascend the stairs and take the yellow key. Taking the key will open an ambush at the entrance. If you want you can kill enemies there. You are now ready to find secret#3 and discover a rocket launcher room to the south of the yellow key.

Return to the computer room behind the first door. Right in this room you can enter two of the yellow doors but there is also the third yellow door to the north of the room. All the doors eventually lead to a room where you can descend to a nukage hall. In this hall enter any hallway to the north and ascend the stairs toward the switch. Flip the switch and return back to the nukage hall to discover the door open. Shoot the enemies behind the door, then head into a room behind this door. Both the staircases in front of you lead to one room, the hardest area on the level. Once you will be in that room knock off the enemies (but spare the barrels for later). Flip the only switch and be careful. Three traps will open containing bunches of enemies. You can blow the remaining barrels while standing next to the switch. This will save your ammo and time. Once done, head to the opened room to the north. Now you can finish the level.

Aside from simplification of level geometry in various rooms, there are some significant changes in the layout compared to the PC version.