MAP06: Chaostile is the sixth map of End Game. It is a medieval castle designed by Anthony Soto (Swedish Fish) using GothicDM textures. In 2000 its inner courtyard was started by Michal Mesko (msquid) which Anthony later expanded into a complete map layout. 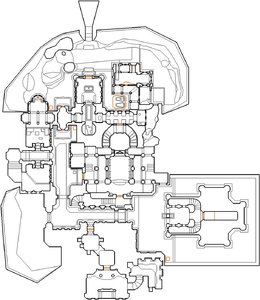 Map of Chaostile
Letters in italics refer to marked spots on the map. Sector numbers in boldface are secrets which count toward the end-of-level tally.

* The vertex count without the effect of node building is 3893.