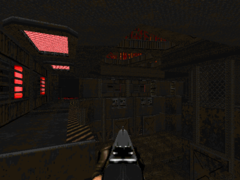 MAP06: Collapsys is the sixth map of UAC Ultra. It uses the music track "Bergschrund" by James Paddock. 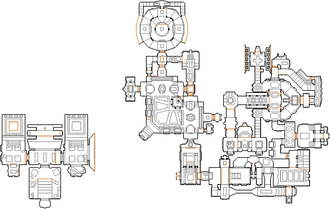 Map of Collapsys
Letters in italics refer to marked spots on the map. Sector, thing, and linedef numbers in boldface are secrets which count toward the end-of-level tally.

Due to the length of the map, and to speed up gameplay in cooperative mode, halfway through the map there is a walkover line that activates a door revealing a teleport in the starting room that players can enter to skip the first half of the map and get right back into the action after they are killed and respawn.

Descend the steps and follow the path, grabbing the chaingun and killing enemies along the way. When you reach the next set of steps, take them up and hit the switch for a lift up. Here, you can get a super shotgun by approaching the panel where the imps and shotgun guys are guarding. Press the hand panel to lower the next lift. Down here, an arachnotron will arrive with another lift. Take him out and ride up, killing monsters until you reach the next switch. After flipping it, two platforms below will rise up, and you can go either north or south. Go north first, the room up ahead has a few supplies including a backpack. Follow the path here until you reach a lift. It will go down to a path you crossed earlier, and you will be able to reach the yellow key. Some enemies appear upon grabbing it, so kill them and use the switches around here to lower the platforms. Now you should head south.

Some imps and barrels will be in the hall before the yellow door. Inside, head up to the hand panel and press it to lower the bars to the next area, being wary of the chaingunners (or revenants on Ultra-Violence or higher). Keep following this path until you reach a large room with an arachnotron (two on Ultra-Violence or higher). You can head through the door, but before doing so, head west, kill the spectre, and press the switch. This raises the ceiling just before so you can continue. Now open the door and follow this path, hopping the gap. The next room will have a bridge you need to raise, with an armor on it. Press the hand panel to the south and cross the bridge. Stepping on the pressure plate awards you with a box of rockets and some imps. More importantly, you can continue westward.

Get the rocket launcher here and press the switch for another lift upwards. Take it up and kill the Hell knights that attack. Going down the stairs, look out for imps (shotgun guys on Ultra-Violence or higher) before the door. There are number of enemies in this room, but you want to head through the east door. This one contains an arch-vile and a switch that lowers the bars to the more open segment of this room. Several more enemies will be here as well, so kill all you can and head for the door to the north here. The next big room has several former humans, all guarding the way to the blue key. Press the switch to lower it, looking out for more zombies to appear upon picking it up.

With the blue key, return to the previous room and find a blue door in the northeastern corner of this area. Use the switch for a lift up, and go north for a baron of Hell, imps, and demons (only on Ultra-Violence or higher) guarding an armor. Follow the path as it branches west and south and you should be on the ledges in the previous room. The southwestern corner here has chaingunners guarding a switch, which will open up two columns with pain elementals in each one. Hop across either of these columns and enter the teleporter.

Approach the big door for it to open, killing the arachnotrons on the other side. You need the red key for the door on the left, so go right for the next door to open. Pick up the plasma rifle as you kill the mancubi (and the revenants on Ultra-Violence or higher), and then pick up the red key from the rubble to the south. Open the red door for a mancubus (and more revenants), and use the lift to the south. Pressing the exit switch here lowers the bars to the compactor here, but also reveals a cyberdemon guarding the exit. Entering the trash compactor kills you and strips you of your supplies for the next map.

* The vertex count without the effect of node building is 4084.

This map was originally planned for the MAP03 slot until being almost entirely redesigned due to the negative feedback of the playtesters. The redesign still features some salvaged rooms but is heavily composed of fresh new areas, and extended in length compared to its original counterpart. Much of the mapping had been done by Jon Vail, save for the exit room which was done by Super Jamie. Jamie is also credited for handling the majority (about 95% of it) of the item and monster placement seen in this map.