MAP06: Collider Complex is the sixth map of Plutonia 2. It was designed by Sam Woodman and Vincent Catalaá, and uses the music track "Sign of Evil" by Robert Prince. The par time defined in MAPINFO is 2:30. 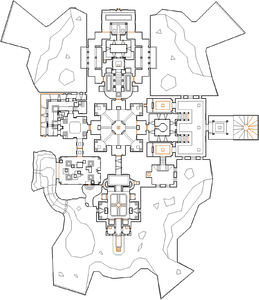 Map of Collider Complex
Letters in italics refer to marked spots on the map. Sector, thing, and linedef numbers in boldface are secrets which count toward the end-of-level tally.

You will start out in a hub, with several weapons and monsters in the corners, and four doors to choose. Your only choice at the moment is the western door. Grab the super shotgun and get rid of the monsters in this area. The red skull key is in this room, just behind one of the walls (it is close to a corner where there are shotgun shells and chaingunners. Return to the hub and take the red door to the north. Enter and kill the chaingunners to the sides. You can go straight down the stairs, but first take either side door. Both doors lead to symmetrical paths that meet up in a room overlooking a caged area where the blue skull key lies. Grab the plasma gun here and dispatch of any monsters that attack you, then flip the switch and the switch behind it to make the blue key lower. Kill the pain elementals that show up, then go back to the first room and then down the stairs this time. Flip the switch at the bottom then through the bars, going around to get the blue key.

Upon getting the key, head back to the hub, watching out for chaingunners and later revenants. Go through the blue door on the right, killing imps on the terrace and mancubi down the stairs. Keep going east to a room with a lot of supplies, and then up the steps to the light pillar. Run around the pillar and it will lower, but you will fight off a large amount of monsters. When the pillar lowers, collect the yellow skull key and leave the area, returning to the hub to find a cyberdemon. Kill him and take the yellow door to the south, killing the demons and Hell knights you come across. Heading straight south past the nukage fall with the BFG9000 on it, you will find the exit is blocked off. Also, several compartments open up behind you with revenants and mancubi. To the sides of the bars blocking the exit are two teleporters, each leading to one of the revenant compartments, with a switch in both of them. Hit both switches, looking out for teleporting monsters after each one, and the exit should be accessible.

In the room with the red skull key, you can get a rocket launcher by going north across the nukage to the outer walkway and following it to a switch. After flipping it, go back down the walkway and across the nukage again to the newly-opened door to find it along with a couple of revenants.

South of the red key room you can open the door to a cargo area with shotgun guys, demons, and a few supplies. If you go west, outside, there will be imps on a ledge, and an arch-vile will teleport in. Following the nukage river down you will find some boxes of ammo and a berserk pack.

In the backwards E-shaped hallway past the blue door with mancubi on it, there are two side paths you can explore. Both have arachnotrons and a teleporter in them. The teleporters take you to the other room on the opposite side. Entering either of these rooms triggers a wall to lower with revenants and a baron of Hell.

* The vertex count without the effect of node building is 3012.