MAP06: Communications Relay is the sixth map of TNT: Revilution. It was designed by XenoNemesis, Steve Muller (Kyka), Darryl Steffen (dobu gabu maru) and Micah Petersen (Jaws in Space), and uses the music track "Contempt (I Hate You)," by Viscra Maelstrom. The par time is 4:15. 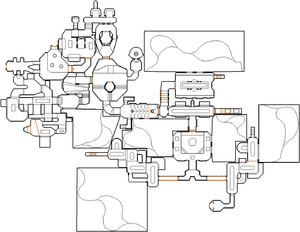 Map of Communications Relay
Letters in italics refer to marked spots on the map. Sector, thing, and linedef numbers in boldface are secrets which count toward the end-of-level tally.