MAP06: Compound of Dripping Filth is the sixth map of 32in24-5, a deathmatch megawad. It was designed by Andrew Apted, detailed by Matt Cibulas (RottKing), and uses the music track "Kitchen Ace (and Taking Names)," originally composed by Robert Prince for Doom.

Overall it was the eleventh map made for the project, with the initial layout submitted twelve hours into the session. 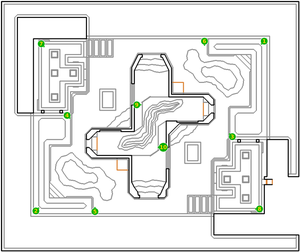 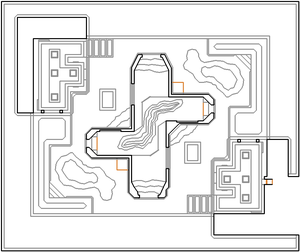 The eponymous compound in this map takes the form of a moderately sized rectangular area with a layout that is symmetrical about a diagonal line running from the south-west to north-east corners of the map. There are two buildings, found in the north-west and south-east corners, that are accessed directly from ground level by steps along the north and south walls respectively outside of the building. Due to the symmetrical nature of the map, they are almost identical, even in their item placement, with both containing a shotgun, a medikit, and two energy cells, although the south-east building contains a door to a small alcove with the exit switch.

Each building leads outside to a expansive walkway, which cover the south-west and north-east corners, and extend around to cover part of the north and south walls. There are more steps in the corners to access this quickly from ground level without having to go through the building. At the end of the walkways, players can find an item: a megaarmor in the north-east and a berserk in the south-west. The north-east walkway also has some rockets lining its eastern wall.

At ground level, patches of broken ground in front of the steps to of the walkways both contain shotguns, and nearby lifts against the exterior of the central structure can be lowered to receive either a rocket launcher from the south-west lift, or a plasma gun from the north-east. More artificial-looking indentations into the ground can be found near each of the steps into the buildings, these both contain a chaingun.

The central structure itself has four entrances, one on each side of the map. Inside is an underground cavern with a river running through the chasm dividing the north and south sides of this area. The west and east entrances will drop directly into the chasm, and both ends have a lift allowing players to get back out. At the centre of this area, in the chasm, is the super shotgun. Additionally, another billboard featuring the title screen of the first 32in24 can be seen just inside the east entrance to this area, whilst a second billboard reading "Unidoom on top!" can be seen inside the west entrance.