MAP06: Contact is the sixth map of Disrepair. It was designed by Andrea Rovenski (Cyberdemon531) and uses the music track "More" by Jonathan El-Bizri, Josh Martel, L.A. Sieben and Tom Mustaine (from TNT: Evilution). The par time defined in MAPINFO is 2:20. 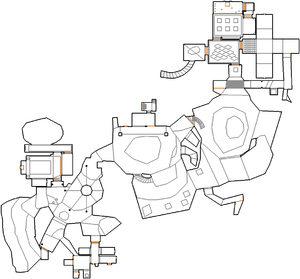 Map of Contact
Letters in italics refer to marked spots on the map. Sector numbers in boldface are secrets which count toward the end-of-level tally.

Head to the south west of the map, watching out for demons and revenants along the way. Inside the southernmost building, press the switches to unlock rooms, eventually pressing a switch which lowers the yellow key. From there, head into the yellow door, and pressing the switch beside the cacodemon room lowers the metal block leading to the Hell knight infested walkway in the main room. From there, run onto the building's balcony, pressing the switch and allowing you access to the second half of the map. Take the eastern door in the new building, hit the switches behind the two mancubus, and take the lift beside the Daedabus up to the red key. Hit the switch in the area behind the now-lowered wall to reopen the door to the building, then follow the red key door to the exit.

It's possible to glide past the metal block with the switch texture, up to where the barons are, avoiding the western side of the map entirely. For UV max runs, you can bypass the need for the blue key by arch-vile jumping to the area with the plasma rifle and secret #4.

The person featured in the Easter egg (linedef 1838) in the tunnel behind secret #5 is solonface (formerly RainyDayLetsPlay). RDLP proved to be a figure of fun to Cyberdemon531 during the making of Disrepair, in particular a lecture on 'The Art of the Let's Play', in which he laid out the struggles of online content creators, whilst encouraging people to sign up to his Patreon page. Her would-be saga with RDLP was documented on Cyberdemon531's channel here.