MAP06: Covert Operations Facility is the sixth map of Whispers of Satan. It was designed by Paul Corfiatis, who also wrote the music track for this level, "Into The Darkness". 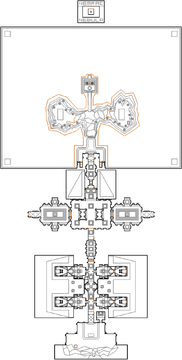 Map of Covert Operations Facility
Letters in italics refer to marked spots on the map. Sector, thing, and linedef numbers in boldface are secrets which count toward the end-of-level tally.

Pick up the shotgun at the start and head down the lift. In this tiny hall you will notice the red key atop a pillar and several doors with numbers in front of them. Each door has a identical set of rooms. Press the switch at the base of the pillar to open the door labelled "1". Head through that door and head around the computer panel, up the stairs to the next door. Open it and head around the column to a switch and flip it. You need to repeat this process 3 more times in order to gain the red keycard, in order of the doors labelled 2, 3, and 4. When you grab the key, head north to the red door at the end. Kill the monsters in the next hall and take the lift down. In the next big room, the exit door that is straight ahead is blocked by blue and yellow switches. Luckily, they are both in two identical side rooms accessible from this room. Kill the monsters in each room and flip the switches to obtain both of the keys, looking out for imps in the big room while you get them. When that is done, press the switches and head through the next hall, flipping the switch here to lower yourself to a Hell knight and another door. Flip the switch to open this door and you will find a rocky area over a void. Do not fall here or you will die. Also, look out for the cacodemons who come out from the darkness. Head onto the rocky area, and head for both side switches, looking out for barons of Hell as you do. Flip both switches to open the exit.

* The vertex count without the effect of node building is 4002.