MAP06: Dead Signal is the sixth map of Erkattäññe. It was designed by Nicolas Monti and uses a rendition of the track "Around the World" by Daft Punk, sequenced to MIDI by Nicolas Monti. 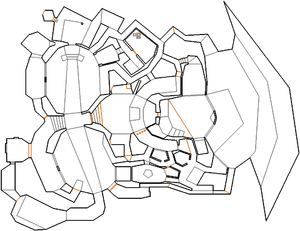 Map of Dead Signal
Letters in italics refer to marked spots on the map. Sector numbers in boldface are secrets which count toward the end-of-level tally.

The first key is easy enough to find. Open the door to get to the next area. Take the shotgun on the left if you do not have it yet. Then, ascend the first staircase to the left. If you want a chaingun, visit the room to the right (west). Follow the corridor to finally get the yellow keycard.

Return to the staircase. Near it there is a yellow door. Open it to get to a room. Grab the super shotgun in the middle and fight numerous enemies (beware of chaingunners on the tops). Fall into the pit and head to the left (north east). Move up with the lift, and you will be in a corridor. Keep following the corridor to the right until you can enter an alcove. There, ascend the stairs, so you can take the red keycard.

Return to the room behind the yellow door and fall down to the pit again. This time, open the red bars to the right. Go forth to the safety and into another room. Here you can obtain various optional items and a plasma gun. After all is done in the room, head to another room in the south west (where there is a floating skull rock decoration). Turn to the right and to the left to find a lift. Move up with this to find a switch atop. Drop to the familiar room and fight new enemies here.

A door in the east side can be easily reached now. Open it to discover the blue keycard. Be careful, as three ambushes will open should you approach the key. Fight the enemies and collect the keycard. Since the stairs are lowered, you cannot escape via the door you came from. You need to escape through the new path located in the northern ambush. You will be in the recognized corridor. Go out as you did when finding the red keycard and drop to the room seen in the start. If you want armor, collect the security armor.

A multiplayer-only BFG9000 (Thing 253) has no flags set for any of the three difficulty classes, so it does not actually appear in the level.