MAP06: Deep Down Below (The Troopers' Playground)

MAP06: Deep Down Below is the sixth map of The Troopers' Playground. It was designed by Matthias Worch. 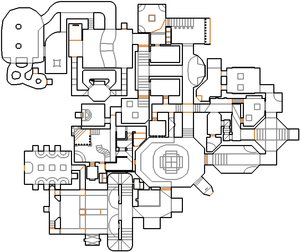 Since it is not possible to step on Secret #5, only 80% secrets is possible on this map.

* The vertex count without the effect of node building is 1676.