MAP06: Departure Point is the sixth map of Congestion 1024. It was designed by Nick Laurent (hobomaster22) and uses the music track " ". 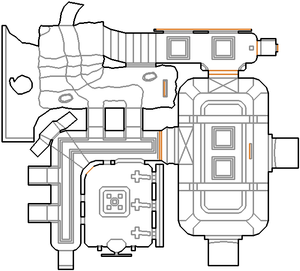 Map of Departure Point
Letters in italics refer to marked spots on the map. Sector numbers in boldface are secrets which count toward the end-of-level tally.

At the start, go forward, turn right and go through the door. Move past the door to your left and climb up the stairs to the left. At the top, make a hairpin turn to the left and flip the switch. Backtrack to the starting area where you'll find a new room to your left containing the blue key on a pillar. Enter it and press the switch to the right. Open the door leading out of the starting room and press the switch directly in front to lower the blue key pillar. Grab the key and retrace your steps to the bottom of the stairs leading to the outside area. Opposite from the stairs is the blue door, so open it and use the switch to end the level.