MAP06: Digi-Ota is the sixth map of Hacx. It was designed by Stephen Watson. 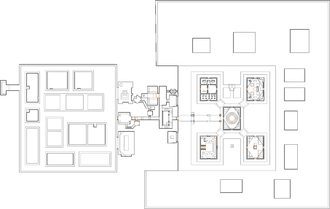 Map of Digi-Ota
Letters in italics refer to marked spots on the map. Sector, thing, and linedef numbers in boldface are secrets which count toward the end-of-level tally.

Turn left to collect a tazer then open the window behind it and drop down to a grassy area with a couple of waiting thugs. There are five buildings in this area that you can reach by crossing the tiled bridge on the west side - you must flip a switch in each of the corner buildings in order to get the password, which is inside the center building.

With all four switches flipped, go inside the center building - a circular ledge inside the building has lowered, allowing you to collect the password in the middle.

Leave the password building and head back across the tiled bridge to a door on the other side, then press the keypad next to this door (requiring the password) to get it open. Step through and destroy a couple of waiting buzzers, then go up either staircase and head north into a seemingly empty room with a hypo and a couple of rounds. There is a corridor that leads west to the KeyCard, but when you are halfway along it the floor will lower and drop you into an ambush by two to six androids. Fight them off then flip the switch in the north-east corner to raise the corridor's floor again; you can then press the wall to lower it like a lift and ride it up to get the KeyCard.

Return to the staircase area and head west into another hallway, which you should follow until you reach a door at the far end. Open the door and ride the lift behind it down to a chamber with some buzzers, then open another door at the far end of the chamber (requiring the KeyCard) to confront two phages. You will be in a town area that is defended by many thugs, phages and androids - fight your way to the north-west corner of town to find one or two monstructs guarding a gray path, then follow this path to a rickshaw to end the level.

The corridor in the center of the map has three brightly-lit sections. As you walk through the second section you may hear a door open behind you; go back to the first lit section and open the door here, then head straight forward through the door that just opened to find a path leading to a 007Microtel, a kevlar vest and a case of torpedoes.