MAP06: Echo Halls is the sixth map of Doom Zero. It was designed by Christopher Golden (DASI-I) and uses the music track "". 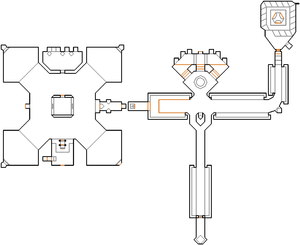 Map of Echo Halls
Letters in italics refer to marked spots on the map. Sector, thing, and linedef numbers in boldface are secrets which count toward the end-of-level tally.

The previous map ends with a damaging floor and a crusher, so you will be coming into this map with extremely low health. Likewise, a pistol start will not be enough to fight off 83 enemies. Carefully make your way to the easternmost room, containing all three keys. As with the first map, picking one key will lock off the other two keys. Make your way back to the northernmost room. The red key will give you a rocket launcher, plenty of ammo, and three invulnerability spheres. The yellow key will give you a plasma rifle, ammo to match, and three soulspheres. The blue key will let you activate a crusher to kill the monsters for you, as well as both weapons (but none of the ammo).

Once the path is clear, make your way to the west. A teleporter will bring you to some ammo for your chosen weapons, and a challenge against a spiderdemon and a number of arch-viles (depending on the difficulty level).

* The vertex count without the effect of node building is 531.