MAP06: Engineering Disaster is the sixth map of Valiant. It was designed by Paul DeBruyne (skillsaw) and uses the music track "Water World", composed by Robert Prince for Duke Nukem 3D. The par time is 5:30. 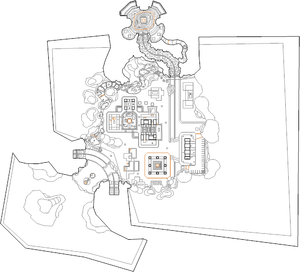 Map of Engineering Disaster
Letters in italics refer to marked spots on the map. Sector, thing, and linedef numbers in boldface are secrets which count toward the end-of-level tally.

Follow the road until you reach a destroyed section with water running through it - on your right are shotgun guys and super imps guarding three switches that will raise some steps to the exit teleporter, after you find all three keys. Walk north-east to drop into the flooded complex, noting the teleporter with an exit sign to the east; you will need to use this once you find all the keys. Fight your way to the north-east corner of the flood zone, watching out for enemies attacking you from overhead or hiding round corners, then climb some stepped rocks leading up to a damaged road with one or two arachnotrons who are guarding the entrance to a tunnel. Enter the tunnel and follow a trail of rockets until you reach a megasphere, then drop into a cavern where you will be ambushed by a spiderdemon and up to ten more arachnotrons; get them to infight, then finish off the survivors and take the blue keycard sitting on the spiderdemon's platform.

Go through the hole in the south-east wall and follow the steps back up to the tunnel, then follow the road south until you get to a junction and turn left to see two or three mancubi guarding some blue bars. Press the bars to lower them and go through to a parking area - you will see three walls inside the building on your right lower, revealing a mancubus and several imps and/or revenants who are guarding the yellow key; more mancubi will teleport in to block the exits, so stay alert. Leave the parking area and head to the raised area near the center of the level, which consists of three buildings surrounding a walled garden. Activate the lift on the west side of the north building and ride it up to the top, then run off the east side of the tower (the side with a red arrow) and follow some metal platforms to reach a ledge with a couple of imps.

Head up two lifts to reach the top of the east building, then drop down a hole to a landing - two closets containing imps, shotgun guys and an arch-vile (plus chaingunners on Ultra-Violence and Nightmare skill levels) will open nearby, so use the metal block in the middle of the landing as cover. Press the button inside the north closet to lower a lift behind you, ride it up then walk over to another arrow and run south from this point to land on a large platform with a skyscraper. Approach the striped block in the middle of the skyscraper and it will lower to reveal a pack of revenants guarding the red keycard. Head back to the south-west corner of the flood zone, passing arachnorbs that have teleported in, and enter the teleporter you saw at the start to get back on top of the dam; from here you can walk west to the three switches and pull them to raise a staircase leading up to the exit teleporter.

A super chaingun can be found by the east wall of the western-most building. If you then go round to the west side of this building you will find a teleporter leading to its roof - you will find a rocket launcher here, but you will have to fight off some imps and zombies while you wait for a second teleporter to lower so you can leave.

When you enter the tower on the north side of the walled garden area, you will see arrows pointing north and south. Run off the south side to land in the garden and find a super shotgun; taking it will lower the walls and allow you to leave, but will also allow a pack of imps to teleport in. Running off the north side of the tower will put you on top of some cliffs - from here you can follow the path west and south to find a plasma gun.

Look behind the yellow key building to find a BFG9000.

* The vertex count without the effect of node building is 7226.