MAP06: Environmental Control is the sixth map of Daedalus: Alien Defense. It was designed by Rick Clark (Wildman) and uses the music track MM_07 by Rich Nagel. 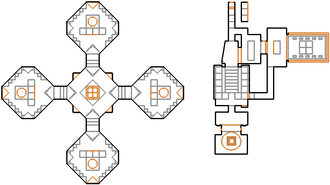 Map of Environmental Control
Letters in italics refer to marked spots on the map. Sector numbers in boldface are secrets which count toward the end-of-level tally.

Go up the stairs and follow the corridor to a room containing a forcefield. Activate the panel on the nearby wall to shut it off. The room beyond contains a console. Activate it to power up the ventilation system, which makes the northern section of the engine room habitable.

In the corridor a door will have opened, revealing lights on the floor and a closet. Enter the closet and trip the switch to teleport to a new area. This room is square, consists of four doors and four small platforms with symbols on them. Press on one of the platforms to open the adjacent door, which reveals a room containing a console at the front, a large tube in the centre and a platform at the back. Press on the platform to cycle through several symbols displayed on the back wall; when you have matched the symbol on the back wall to the one outside the room, press on the console and the tube will become filled with green liquid. Repeat this for all four platforms, and the fourth and last command code will be unlocked.

The centre of the square room becomes a teleporter. Use this to return to the starting area, which now has heavy opposition. Return to Engine Room.