MAP06: Foregone Destruction is the sixth map of Community Chest 3. It was designed by Daniel Gimmer (Tormentor667) and uses the Duke Nukem 3D music track "Taking the Death Toll." It is the author's first and only Boom level. 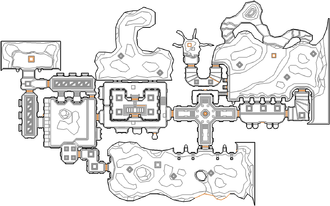 Map of Foregone Destruction
Letters in italics refer to marked spots on the map. Sector, thing, and linedef numbers in boldface are secrets which count toward the end-of-level tally.

* The vertex count without the effect of node building is 5655.

This level started development on June 9, 2007, and was completed in only three days. Upon its completion on June 11, 2007, the level was briefly released to the public by mistake, but was subsequently removed and submitted privately.