MAP06: Fortress is the sixth level of Resurgence. It was designed by Josh Sealy (Joshy) and uses the music track "Behind the Mask" by John Weekley (PRIMEVAL), composed specifically for the level. The map is a remake of MAP06 of Surge, and takes place in a dark Gothic fortress. 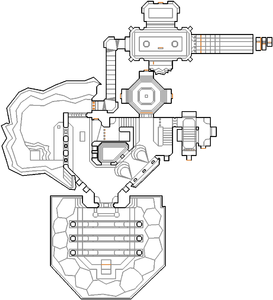 Map of Fortress
Letters in italics refer to marked spots on the map. Sector, thing, and linedef numbers in boldface are secrets which count toward the end-of-level tally.

This level has a significantly more dangerous start than ones before it, due to the presence of at least four sergeants in front of you, and the fact that due to the death exit of the previous level, you will be starting this map with just the pistol, in front of the entrance to the titular fortress.

Since there are at least two cacodemons coming towards you, and the sergeants are turned away the safest (though slowest) way of tackling the start area is to stand behind a sergeant and let the cacodemon kill it, and take its shotgun. It may be wise to try and repeat this for the rest of the sergeants, though not necessary. Shooting a weapon once will cause chaingunners to teleport in at the entrance to the fortress ahead of you, which will give you a second weapon. A shotgun and chaingun are also lying on the floor just inside the fortress entrance.

Once you have cleared the start area, go into the fortress and head down the right path. You will see a blue skull key mounted on a wooden plinth. Entering the small room will raise the plinth at a great speed, and additionally, the three marble panels with the baron faces will open to reveal a total of four imps, four demons, and two revenants (or two cacodemons on ITYTD and HNTR). Each alcove these monsters are contained in contains a switch, all three of which will need to be pressed to lower the plinth. Be careful of the arachnotron that teleports to the fortress entrance after you do this.

Go back along the hallway and go into the opening you will see on your left when you reach the end of the light grey wall, and go up the stairs. The area on the left at the top of the stairs is blocked by some metal bars, so turn right and follow the hallway past the next stairs going down towards more bars and a small pool of blood, and press the switch. This lowers the bars in the blood pool, so go past those bars and press the switch behind them. This will spring a trap at the top of the stairs, containing two imps and a cacodemon (or two imps and revenant on UV and NM. Kill these, then turn left and carry on across into the newly opened section, which turns out to be a narrow ledge, overlooking the path to the blue skull. On the other side of the path is another ledge, with stairs leading into another area. Run across the gap to the ledge, then go up the stairs, and open the blue bars. Press the switch on the right, which lowers a bar on the other side of the next gap. Use the marble plinth to help cross the gap, then go through the opening made accessible from the lowering of the bar. Make sure not go through the opening too quickly, as you need to land on the grey platform below. If you overshoot, you will need to make your way back to the first gap and start this section over. Take the red skull key from the small wooden plinth.

Drop down into the area below and take the rocket launcher and its ammo. Go around the corner of the fortress, open the red bars, and take the soulsphere. Follow the hallway down the steps, and you will arrive in a small dungeon. Opposite where you are standing are some bars, behind which is the level exit. Press the switch in the middle of the dungeon, and an arch-vile will appear on the ledge in front of you. In addition, the large door behind you will open, revealing another switch and thirty-two imps. A second arch-vile will appear at the bottom of the steps you just came down. The best way of dealing with this area is to run past the second arch-vile and back up the stairs, and deal with the second arch-vile from there, then kill the imps from the bottom of the stairs, then use the wooden pillars in the dungeon for cover while you take down the first arch-vile. Once all the monsters in the dungeon are killed, press the switch revealed with the imps. This will lower the bars, allowing you to exit the level.

Using straferun, it is possible to take the blue skull key before the plinth rises, which would move it out of reach. This is very useful for UV speed runs, as it avoids dealing with the monsters inside the trap, saving a large amount of time.

* The vertex count without the effect of node building is 1585.