MAP06: Four Square is the sixth map of Claustrophobia 1024. It was designed by Eric Baker (The Green Herring), who also wrote the music track "In a Mad Rush" for this map. 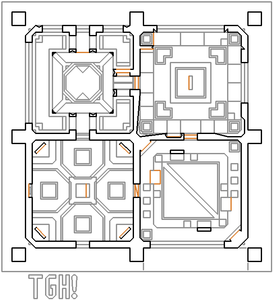 Map of Four Square, cropped to only show the playable area
Letters in italics refer to marked spots on the map. Sector numbers in boldface are secrets which count toward the end-of-level tally.

* The vertex count without the effect of node building is 1367.

In the second room, some of the walls feature visible upper, middle, and lower textures, but act like solid walls. These were created by creating dummy sectors in each of these walls, assigning them the same heights for the floor and ceiling, and using the height transfer linedef type to set them to the appropriate height for the middle textures to appear.

In addition, in the northeast room, several cacodemons are summoned into the level using a conveyor belt effect, which is normally never possible to do with flying monsters or hanging objects. This is accomplished by assigning a height transfer effect to the sector containing the cacodemons to make the sector "underwater." This was added to the level after the effect was pointed out by Andrew Apted in a "mapping tips and tricks" thread started by Sarah Mancuso. [1]

This level was started on October 17, 2008, during the alpha stage of Claustrophobia 1024's development, for the ill-fated sequel, Constriction 1024. When development of Claustrophobia 1024 resumed due to the poor quality of several of the existing levels, Baker signed onto the project, and resumed work on this level after finishing MAP01: The Warp Facility. An unfinished version of the level was posted on February 3, 2009, to solicit comments and suggestions, and it was finished on February 12, 2009. It was updated on February 20, May 21, and June 7 of the same year, to fix various bugs, make suggested edits, and add new background music.

The working title of this level was Four Rooms, after the 1995 anthology film of the same name. On the same day the level was finished, Baker asked for suggestions on whether the name should be changed, with three of the four suggested titles being Metal Mayhem, Metal Massacre, and The Middle of Nowhere. The last of these, Four Square, became the final title, and refers to a popular playground game which is played with four players on a square court divided into quadrants.