MAP06: Goin' Down is the sixth map of Community Chest. It was designed by Kevin "Magikal" Reay, and was one of his final two levels prior to his death. 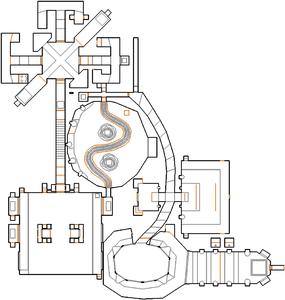 Map of Goin' Down
Letters in italics refer to marked spots on the map. Sector, thing, and linedef numbers in boldface are secrets which count toward the end-of-level tally.

Run toward any of the medikits in the middle of the room to reveal armies of sergeants and revenants on either side of the room. Dispose of them all, and align yourself with the middle wall of the north side of the western structure. Turn to the north, and open the northern wall to find a teleporter. Use it, and open the middle set of computer panels. Enter the teleporter, and then run straight to the other end of the walkway. Open the southeast wall to find another teleporter. Go inside, and open the misaligned wall in the next room to find the blue key. Open the eastern wall to go back to the western walkway, and then return to the eastern one. Open the northern set of computer panels, and you will find a lava cavern with a curving bridge. At the other end, align yourself with the northern side, and do a running jump to the walkway. It will take quite a bit of practice to pull this off, and it is significantly easier if you straferun. Grab the yellow key, return to the start of the bridge via the teleporter, and head to the yellow door to the north. Open it.

Go through the blue door to the east, and head down the stairway until you find two large alcoves at either side of you. Enter the eastern alcove, and go down the three successive lifts that follow. You will now be in a cage with a satyr panel in the eastern side, and a pair of doors and switches to the north and south. Align yourself with the satyr face, and walk toward the cage bars; this section of the bars is fake, and you can pass through it. Press the northern switch, and run into the teleporter behind the southern door. You will be taken into a curved lift. Press the switch to be taken down to the next room, and then press on the demonic faces to the west to reveal another lift. Run inside to be warped to another such lift, and flip the switch to be taken to a dark walkway to the south. Go all the way around, and flip the switch. Go to the east of the walkway, and run down the stairs. Open the door, and flip the switch.

* The vertex count without the effect of node building is 1586.