MAP06: Grinder is the sixth map of Sunder. It was designed by Insane_Gazebo and uses the music track "Suspense," a remix by Jay Reichard (silentzorah) of the track originally composed by Robert Prince for Doom. 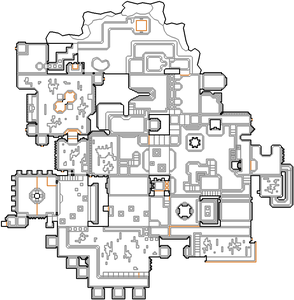 Map of Grinder
Letters in italics refer to marked spots on the map. Sector, thing, and linedef numbers in boldface are secrets which count toward the end-of-level tally.

As you no doubt will be aware, the beginning of this map will prove to be a tough challenge. You are given both shotguns and a green armor at the start, and a rocket launcher is on a lift to the south (the lift will lead up eventually, but you are not able to use it yet). A chaingun is on the platform ahead with mancubi on it, but you will also need to watch out for the cyberdemon nearby. The imps on the ground should be cleared as soon as possible, and make sure to keep on your toes as enemies on the high ledges will rain projectiles down on you. Your goal at the moment is the ledge on the west side with the mancubi on it. Get on this ledge and collect the plasma gun to the northwest, then use the switch at the southwest.

Pressing that gargoyle switch lowers the barricade with gargoyle faces on it, which was at the north end of the grounds. Climb the steps up, and when you reach the high ledge, two walls will lower, revealing revenants to the west and a cyberdemon to the east. Not only that, but revenants, Hell knights, and three arch-viles show up on ground floor. It might be best to take on those enemies first. Continue back up the steps when it is clear, clearing out enemies on the next high ledge before traversing it. You will meet two pain elementals, then shortly after that two barons of Hell. Behind them is the high ledge that had numerous imps on it, which you may have killed earlier. A wall lowers as you enter this area, revealing cacodemons. Head southeast from there to find another gargoyle switch. This will raise the lift that had the rocket launcher, allowing you to head up. An arch-vile will be lurking, while the spider mastermind is directly guarding the blue key here.

West of the platform with the chaingun are the blue bars. Take the lift up. If you want a megaarmor, look to the west and traverse the platforms, being careful not to fall as there is no way out of the lava. Take the small set of steps up and to the east a wall will lower with cacodemons and two arch-viles behind it. There are two more arch-viles directly to the south of this wall. You can jump to the soul sphere platform to the northeast, where the first cyberdemon was. Attempting to go further east will cause a wall to the east to lower, with revenants, Hell knights, and two cyberdemons behind it. The high ledge has revenants on the higher wooden ledge (which you should probably snipe before releasing the other enemies), plus demons who will teleport in. Be extra careful here as there is not much space to maneuver around the projectiles. Pressing the lion switch on this high ledge will lower bars to the west, where a huge horde of imps will come pouring out.

At the area where the imps are, walk up the steps and prepare to fight a horde of teleporting monsters pouring out from multiple teleporters on this ledge, including cacodemons, Hell knights, and three arch-viles. Stick around for a bit to ensure that all the monsters are fought, then move all the way to the end of the high ledge. You will have to traverse more platforms over the lava, so be extra careful as there is no way to leave the lava if you fall. At the energy cell pack, climb the steps to the small square cage with cacodemons. You will be locked in and will have to fight an arch-vile and a cyberdemon in the cage, while another group of cacodemons will harass you from outside the cage. An invulnerability is located where the arch-vile came from, so you may use it now. However, if you are skilled enough, you can save the invulnerability for a later time.

If you saved the invulnerability take it and take the teleporter where the cyberdemon was. In the room that follows, the switch here will remove the bars from the cage earlier, although it is not necessary to use this switch. Stock up in this room and collect the megasphere, then open the door to the final arena. You will notice several red teleporters here, in which monsters will come pouring out. These monsters include Hell knights, revenants, barons of Hell, four arch-viles, and two cyberdemons. There is a megasphere to the right and an invulnerability to the left, with another invulnerability to the north of there. It is likely you will be surrounded by the monsters that will come pouring out, so this battle will require conservation of the invulnerabilities to survive. A white teleporter at the north end of the arena takes you back to the entrance if you need a quick escape. Four switches are on the big teleporters, and each switch removes a bar blocking the way to the exit, which is by the northern invulnerability. After hitting all four switches, you can reach the exit.