MAP06: Hillside Siege is the sixth map of the megawad Alien Vendetta. It was designed jointly by Lee Szymanski and Anthony Soto and constructed with DeePsea 11.30. It uses the music track "Excalibur" from Rise of the Triad. The par time defined in the executable is 7:00. 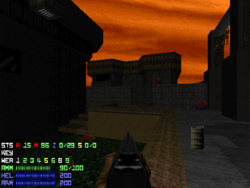 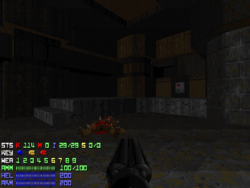 After the yellow door

The basic architecture was designed by myself for a project by Adam Windsor. Design progress was however too slow to be included, this is a recurring theme in my mapping 'career'.

Anthony had been providing feedback on the map design, an area where I was still limited technically. I hadn't touched the map for some time when Anthony informed me he'd submitted it to a project called Alien Vendetta.

This was worrying, I didn't want to let the project down. The northern area was completely redesigned to remove an annoying jumping puzzle, and to make it more open. Anthony took over the design, his many changes include adding the gallows to the start area and retexturing the map (from mostly BROWNGRN).

Gameplay difficulty was increased by Anthony and Anders, my ability not quite matching compet-n level. The cyberdemon being a particularly inspired idea. - Lee 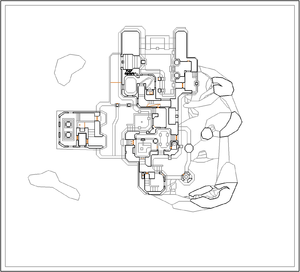 Map of Hillside Siege
Letters in italics refer to marked spots on the map. Sector, thing, and linedef numbers in boldface are secrets which count toward the end-of-level tally.

You have quite a lot of monsters to take out at the beginning, so grab the chaingun and get to it. Make your way up the stairs into the room here grabbing the super shotgun and pressing the switch. This lowers the yellow keycard, so you can pick it up from the nukage. When that is done go through the yellow door which was just east of your starting point. Clear out this room of monsters, and flip the solitary switch here to lower the two bars into the next hall. You will see a red exit doorway. Pass this up for now and head up outside. There are several mancubi and Hell knights up here, as well as a blue door to the southeast. Go around and reenter the building to find the blue key, then use it on the blue door. Drop down and you should land on a rocket launcher and a radiation suit. From here, start climbing the hills to the north. There are several tough monsters up here, so make sure you are able to kill them. Along the way you will see the red key on a ledge. You need to get it to not only reach the exit, but the door at the end of the rocky pass. Climb up on the rock ledges near the stairs leading to the red door, up onto the ledge where the imps where, and then climb the ledges up to where the mancubi where. From here you should obtain the red key.

Now use the key on the door and head through to a large area with several monsters, including a cyberdemon on top of a rocky ledge. Climb the set of stairs here and find the next switch to press, opening the rock wall to the west revealing revenants. A set of Hell knights follows them. There is a switch at the far end. Approaching it causes the door to your left to open exposing you to revenants and cacodemons from that side. You need to flip the switch though, to open a compartment in that room with an arch-vile and a passage back. You will find a red door at the end of this passage, this will take you back to the room where the very first switch you pressed was.

You will notice you are back where you started, except now the wall to your right has lowered revealing a new building to traverse. Also take note that you cannot access the yellow door at this time due to it being barred off. Take the door into the new building killing the line of imps in front of you. The plasma gun is in this next room guarded by revenants and Hell knights. For the next door, approach the lift and it will lower giving you access up. Take a left once you are at the top, and you should find a switch here. Press it, watching out for the duo of shotgun guys to the left, and the barriers blocking the yellow door should be open again. Reenter this building. There may be an arch-vile running around resurrecting enemies, so take him out, and find the red door that you passed up way earlier in the level. Take it, removing zombiemen from your presence as you make your way to the exit switch.

In the western building, from the mancubus sniper position the entire starting area can be seen. The seg limit for Doom can be exceeded leading to HOM. This effect is however difficult to spot without monsters behind windows of sectors 165 and 176.