MAP06: Inferno of Blood (No Rest for the Living)

MAP06: Inferno of Blood is the sixth map of No Rest for the Living. It was designed by Arya Iwakura and uses the music track "In The Dark". The par time is 1:45. In the version released as an official add-on, it utilises the red hellish sky of Doom II ("SKY3") instead of the default one featuring brown clouds ("SKY1"), thanks to DMAPINFO. 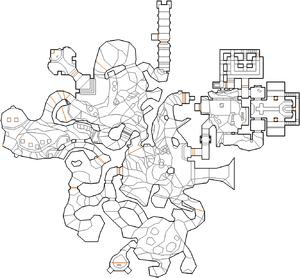 Map of Inferno of Blood
Letters in italics refer to marked spots on the map. Sector, thing, and linedef numbers in boldface are secrets which count toward the end-of-level tally.

Go straight, push the skull switch on the left, wait for the green marble block to lower, get through it, go across the rocks and open the wooden door.

Go through the non-linear maze until you get to a room with 5 skull switches, push the eastern-northern switch to lower two walls, then the western-southern switch to get short-time access to the yellow skull key, quickly go through the lowered walls and take the key.

Backtrack outside of the wooden door and go through the yellow door on the higher rocks, go straight, then left and go across some rocks, and take the blue skull key.

Backtrack to spawn but go through the blue door and step onto the pentagram.

* The vertex count without the effect of node building is 1910.