MAP06: Mix Up the Satellite is the sixth level of the first episode of Back to Saturn X. It was designed by Trevor Primmett (iori), and uses the music track "Nanonucleonic Cyborg Summoning" by Elric Sullivan. The par time is 4:45. In the official add-on version, this level's name is Visplane Holding Zone. 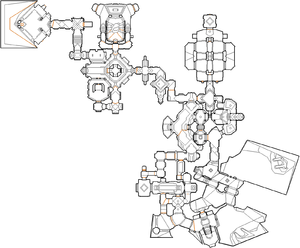 Map of Mix Up The Satellite
Letters in italics refer to marked spots on the map. Sector, thing, and linedef numbers in boldface are secrets which count toward the end-of-level tally.

Take the super shotgun then head north-west through an open doorway to a junction with a few enemies; you will see a yellow key door ahead that will be used later. Go north to a lift, arm yourself then flip the switch inside it to go down to a hall with a variety of zombies, imps and demons (plus revenants on Hurt Me Plenty (HMP) skill level or higher) that you can kill using the rocket launcher by the north wall. There is a "LOCK" panel inside the south column - pressing it will open two closets behind you with a demon and a berserk pack, but will also open three chambers containing more of the same enemies as well as an arch-vile on the north side. Go inside the north chamber and press the "LOCK" panel here, then go to the south side of the hall and enter either of the blue teleporters that have opened to go back to the start.

The door in front of you has opened, revealing one to three revenants along with imps. Follow the corridor south past some Hell knights until you reach a turning with a health bonus, then continue south past a pack of zombies until you get to a door and open it to see some steps leading down. The steps lead to a dead end, so turn right (west) into a corridor with a mancubus and one or two cacodemons, pass them then round two corners to enter a room with a water trench - the room also holds revenants and a pain elemental on HMP or higher. Head west then north to drop into a water tunnel, then follow this north and east past some spectres to a lift that leads up to the floor above. Slay some imps waiting at the top then go round the corner to enter a passage with lots of corpses; run north to find (depending on skill level) an invulnerability, megasphere or supercharge and use it to help get rid of two or three arch-viles that teleport in, then go through the east doorway and head up some steps to the yellow keycard.

Head north back to the yellow key door you saw earlier and open it, then follow the hallway north and west until you reach an armor and a set of steps leading to a diamond-shaped junction; approaching the steps will open two compartments behind you holding a few monsters, including an arch-vile on HMP or higher, that should be killed along with one or two arachnotrons waiting ahead. Go down the steps and head north to a T-junction, then go left or right and follow the corridor round until you reach a mancubus guarding a doorway that leads to an outdoor rockery. Go down the rockery steps to a pool holding the red keycard, but arm yourself as taking it will cause a revenant (or arch-vile on HMP) to teleport behind you as well as releasing cacodemons and imps/revenants into the surrounding corridors.

Go back to the diamond junction and take the south path this time, then round the corner to find a red key door. Open it and dispatch a waiting revenant, then enter the next room and push past some imps to reach an arrow button that will lower a wall straight ahead. Step through this wall and drop to the water below, which will lower another wall ahead to reveal more imps, then step through and turn left to kill an arachnotron before heading up the stairs next to it. Turn left at the top to enter the exit area, which contains a megasphere (or supercharge on HMP or higher); you will want this item as it is protected by pain elementals, imps and mancubi, as well as a pack of revenants that are released behind you. Press the "LOCK" panel on the south wall to open an alcove in the north wall containing a button, which will reveal the exit teleporter at the west end of the room.

The diamond-shaped junction past the yellow key door holds a plasma gun on HMP or lower.

* The vertex count without the effect of node building is 5214.