MAP06: Mount of Steel is the sixth map of Avactor. It was designed by Eradrop and uses the music track "". The par time defined in the DEHACKED lump is 45:00. 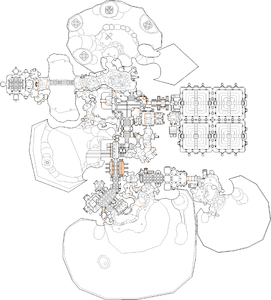 Map of Mount of Steel
Letters in italics refer to marked spots on the map. Sector, thing, and linedef numbers in boldface are secrets which count toward the end-of-level tally.

Enter the first cave and fight your way east across the bridge and into the yellow skull key room. There are three skull switches that trigger ambushes; pressing all three will lower the yellow skull key. Collect it and return to the first cave, now flooded with lava. A switch in the northeast raises pillars to the yellow door. Inside, head east down an elevator, through an assembly line, and into the lava arena. Carefully make your way around the arena, pressing the six skull switches. After the lava rises, collect the red skull key and use it to lower the central teleporter. Note that this area cannot be re-entered, so collect items and dispose of enemies before using the teleporter.

Back up top, head west on the path that curves back around to the red skull switch. Press it to open the south door. On the way back around you'll encounter a lava brawl detour. Ride the elevator in the west, proceed around the rim, hit the skull switch to open the gates, and fall back down near the blue skull key. Head through the south door and fight a series of battles past the blue door and around to the stamping room. Take the elevator up to grab the blue skull and trigger another fight.

Head back through the south door to the blue key door and down to the radiation suit complex. To obtain a suit, you'll need to fight through a series of rooms and ambushes. The first switch is found along the lava shore. Hit the switches in each subsequent room to progress. Upon grabbing a radiation suit, you'll be dropped into another ambush. Finish them off, then grab the other suit for the lava walk. The radiation suit on the lava walk triggers another ambush. You'll need to detour into the left cave to hit a switch that removes the bars on the far side of the lava. Past the bars, ride the elevator up and use the switch to open the path to the exit elevator. Collect the supplies before activating the elevator; it's a long way down and you'll have company most of the time. At the bottom, head into the hidden cove and commandeer an exit ship.

* The vertex count without the effect of node building is 19822.