MAP06: Neo Gerouru is the sixth map of Sunlust. It was designed by Zachary Stephens (Ribbiks), and uses the music track "Plantation Crash" from the game Zone 66. 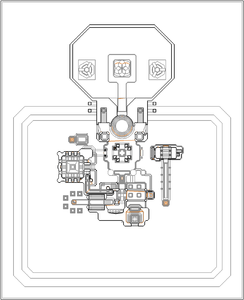 Map of Neo Gerouru
Letters in italics refer to marked spots on the map. Sector numbers in boldface are secrets which count toward the end-of-level tally.

In the start, turn right. You will see beige floor to your right. Go there. Mind two Hell knights to your right. Go left and press the switch. This will build the stairs on which two knights stood on. Walk on the stairs and enter the room with four square pillars with imps on them. Mind the enemies that make an ambush. You may take a rocket launcher. Go to the pillar with arch-vile and enter an opening to the left, then head right. The floor will sink down instantly. Turn left and go to a strange symbol in front of you. There will be barons of Hell (hint: do not waste ammo on them, as they will perish themselves anyway). Go back to a room and eliminate new enemies. A passageway has opened in front of you. Go there and turn right again. This time, jump over and take a berserk pack. Press the switch there to temporarily lower the square pillar on which there was the arch-vile and quickly go on this pillar using the passageway. Once you will be on the pillar, face east. From here you can see a teleporter. Jump over on several pillars to get there.

You will be brought into some room. First, knock down the existing enemies in this room, then find an orange switch. The switch will open a compartment with three knights. Kill them and enter this compartment, in which flip the second orange switch. This will open two alcoves with enemies and a shaft through which you can escape. Either fight or run away from enemies and fall down into the shaft. A strange spiral-like figure will be in front of you. Go to touch it and you will be teleported to a place with another orange switch. Flip it to access the yellow key. Turn back and reuse the similar green spiral.

You will be in the familiar room facing the yellow key. Jump over to it and take it. Right from here, drop to the starting area and take the soul sphere (if you have not yet). In front of you will be huge circular wall (marked with yellow key bars, but it is unnoticeable sometimes, as they are located on either side, so you cannot always face them). The wall actually can be opened. Open it and prepare for a large enemy group that also has arch-viles (kill them first). After you deal with the enemies, enter the circular room and flip the switch. Wait until the room finishes lowering and you will be able to enter the exit area. The exit area is completely black with two building to the left and right visible. Walk around the wall and step on the circular symbol to finish the level.

* The vertex count without the effect of node building is 6893.