MAP06: Open Season is the sixth map of TNT: Evilution. It was designed mostly by Jimmy Sieben, with one quarter of the level designed by Ty Halderman, and uses a music track exclusive to this level. 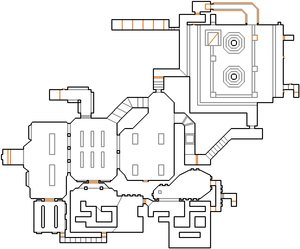 Map of Open Season
Letters in italics refer to marked spots on the map. Sector numbers in boldface are secrets which count toward the end-of-level tally.

The start of the map shows a shotgun and two boxes of shells. When you advance, the floor will raise. You will see various monsters in the room ahead, and the room has a few shotgun and chaingun zombies that will try to flank you.

Proceed to the right to encounter a room with up to six imps. If desired, you can get a chainsaw in the right of the room. Proceed through the door, killing the chaingunner en route.

You will now enter the first chokepoint in the map; on normal difficulty, there are three Hell knights, three demons and any other enemies that worked their way into the area. Hard difficulty will replace two Hell knights with a mancubus. Try to work your way to the super shotgun on the left-side of the room, or make a quick run for it and loop around the room. After you deal with the enemies, you can take out another Hell knight and collect the blue armor in the central room.

Proceed north to the central area, head up the stairs and go to the right. After opening a door, you should see lost souls. Get past them to reach a ledge surrounding a nukage pit; at the end is a blue key card.

Return to the central area, and head north through the blue door. Get the radiation suit, go through the lift to reach the nukage pit; run along a ledge until you approach the yellow key card. When you grab it, an enemy chaingunner is revealed. Once the chaingunner is free, making any attack in the area will teleport cacodemons on the various platforms. While you can jump into the pit to avoid combat (using the switch on the first platform to escape), the cacodemons will still teleport in when you try to flee the area.

With the yellow key, return to the central area, and flip the switch on the south. This opens a door; follow the doors with yellow sidings which bring you back through the chokepoint and through a darkened maze. Proceed to the right of the maze. From here, you can continue to the room above the maze to collect a rocket launcher; the revenant guarding it is defeated easily with the chaingun.

The teleporter leads to the eastern ledge of the nukage pit. It has a few imps guarding the ledge, and has the red key to the north. If you haven't killed the cacodemons, they will encounter you from at this location.

Return to where you found the blue key to flip the switch. This opens the exit in the central area. Head down the opened corridor and flip the switch to lower the exit. On easy, this reveals an arachnotron; otherwise an arch-vile. On the harder difficulty, you can run past this monster to finish the level.