MAP06: P.E.T. Rescue is the sixth level of Icarus: Alien Vanguard, set somewhere on Beta Pictoris 3. It was designed by Gary Gosson. 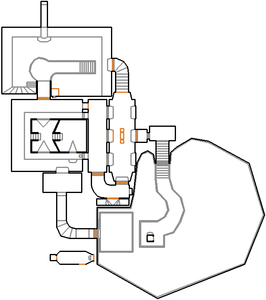 Map of P.E.T. Rescue
Letters in italics refer to marked spots on the map. Sector numbers in boldface are secrets which count toward the end-of-level tally.

Open the door behind you and head north to a stone building. Fall in the moat around the building and go on the far side to spot a barrel and the yellow skull key. Enter the building and go up both sets of steps. Spot the window on the right and jump out of it, then head around the moat to the wooden door. Open it and go down into the water, then head around to the left around to where the stairs are. Head up and all the way around to the yellow door. Open it and cross the hall that follows, looking out as windows open to the right. Go towards the faceted wall with the pentagram at the end and open it, then follow the hall around. In the next room with fire walls and water, press on the nearest faceted wall to get the red skull key, then press on the one just above it. When you do, cross over to the other side and it will open. Climb up the steps and enter the teleporter. Press the furthest panel from the right to exit.

The data was last verified in its entirety on April 1, 2015.