MAP06: Pathos is the sixth level of Eternal Doom and was designed by Alex Mayberry, who also designed level one. It is the last level of episode 1. The time gate has transported you to a time 1250 years before the present. You start off in a medieval castle, but it seems Hell's minions have taken up residence in the past as well! 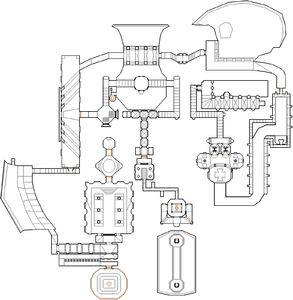 Map of Pathos
Letters in italics refer to marked spots on the map. Sector, thing, and linedef numbers in boldface are secrets which count toward the end-of-level tally.

Near the start, you will have to backtrack slightly to find a newly revealed switch that lets you get into the water. When you are in the waterway in the basement, the blue key is behind the archway drain directly opposite the ladder you use to get out. Take the lift behind the ladder to find the blue door. The red key is deep in the catacombs, and you need to break through the back wall of the secret chamber (to your left) near the red key door to access them. (Try the picture panel in the hallway hinted to by the broken window.) When you get the red key, you will be stuck in a square - look for a shootable switch that will allow you to teleport out. The yellow key is through a door directly opposite the room containing two pools and the yellow key door itself. The door opens for six seconds when you push a dark face stone on the aforementioned room's gallery. When you first touch the key you are teleported to a closed area with a missile launcher. Grab it very fast and use it on the imp and arch-vile that join you soon enough. Open the exit teleporter hidden in the column opposite and be ready to battle an army of imps in the yellow key room. When the exit is in sight, be careful. Take a look at one of the paintings on the wall opposite the exit and you might come up with an idea of what's in store... Just behind the final monster is an Invulnerability sphere which is impossible to see at first. Dodge past fast to get it then either try to blast it to death (tall order) or hit the final EXIT switch to leave it behind.

One deathmatch start (Thing 497) has no flags set for any of the three difficulty classes, but because of special handling in the engine, it functions normally in the level.

* The vertex count without the effect of node building is 2934.