MAP06: Pressure Point is the sixth map of Scythe. It was designed by Erik Alm, and uses the music track "Soldier of Chaos" from TNT: Evilution. 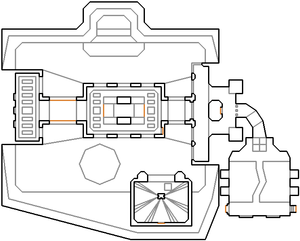 Map of Pressure Point
Letters in italics refer to marked spots on the map. Sector numbers in boldface are secrets which count toward the end-of-level tally.

Grab the berserk pack and drop down. You can get a chaingun if you go north, and find some enemies near barrels here. If you go south, you will find a shotgun and a switch. Hit this switch to raise a wall where your starting point was. Now lower this wall and ride it up. Be wary if you intend to take the rocket launcher as a crusher will come down if you do. You will have to build a bridge to cross further to the east, so hit the switch in the southeastern corner of this area to raise it up. Continue behind the wall to find a satyr switch opening the gates behind you. Go through here and drop down into the final area featuring a couple of Hell knights and some cacodemons. Watch out for the barrels as you fight them, and then exit.