MAP06: Research Center is the sixth map of Simplicity. It was designed by Melissa McGee (Agent Spork) and uses the music track "Suspense", originally composed by Robert Prince for Doom. The par time defined in MAPINFO is 5:52. 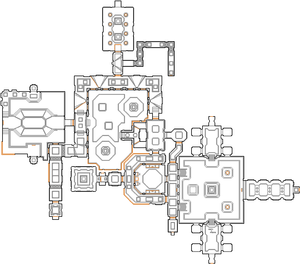 Map of Research Center
Letters in italics refer to marked spots on the map. Sector, thing, and linedef numbers in boldface are secrets which count toward the end-of-level tally.

Step forward to collect a shotgun under your feet, dispose of the chaingunners, imps and shotgun guys ahead then enter the hallway ahead - a metal barrier will rise in front of you and the walls on either side will lower to reveal demons, so step back to avoid being surrounded then enter the north closet to find a button that will lower the barrier and allow you to proceed. Open the door ahead to enter a C-shaped hallway and kill the imps and zombies ahead, then open another door on the north side to enter a small room with more of the same enemies. Walk through either of the west doorways to enter an open hall with imps, shotgun guys and spectres, then open the door on the west side (which has a chaingun in front of it) to reach an oval walkway with more zombies. Press the button at the west end of the room to lower some bars on your left, then fight your way past some spectres to a second button that will lower another set of bars - kill two chaingunners that are released behind you, then head north around the outer walkway to reach the yellow keycard.

Kill the enemies that teleport to the oval walkway, then go back to the open hall - there is a blue-floored corridor around the north side of this hall, and in the north wall you will find a locked door that can now be opened to confront two demons. When you try to open the next door a wall will lower behind you and reveal a passage full of zombies; go to the end of this passage to find a switch that will open the door you tried to use, then go through it and press the button here to go down to a room containing demons and spectres (plus a Hell knight on Ultra-Violence and Nightmare skill levels). Once the room is clear, collect the blue keycard sitting in an alcove at the north end.

Go back to the C-shaped hallway at the start of the map and open the blue key door at the south end, then look to your left to see a super shotgun in front of a switch that will lower the silver bars on either side. Go through either door to enter an outdoor arena, then go up the steps on the north and south sides - up each staircase is a room with cacodemons and caged imps and zombies, as well as a button that needs to be pressed. After pressing both buttons, go to the east side of the arena to find an armor and rocket launcher along with another switch - flipping this switch will open a compartment ahead containing a large number of monsters, so use the rocket launcher to clear them out along with any mancubi that teleport in. Fight your way to the back of the compartment to find another button, press it then go to the center of the arena to collect the red keycard. Now go back to where you found the super shotgun and press the nearby red bars to lower them and enter the exit room; flip the switches by the north and south windows to activate the exit teleporter, kill a revenant that appears there then enter the teleporter to finish the level.

With the blue key, you can open a locked door at the end of a corridor south of the yellow key area. Behind this door is a teleporter that will put you near the red key arena.

* The vertex count without the effect of node building is 4516.