MAP06: Research Complex is the sixth level of Kama Sutra. It was designed by Jakub Razák (Method) and uses the track "CCCool" from Rise of the Triad by Lee Jackson, which is reused in MAP14: Dog Eat Dog.

Method's comments from the text file:

Another Method's nice techbase. I liked to play this one. Finally you will meet first KS cybie. 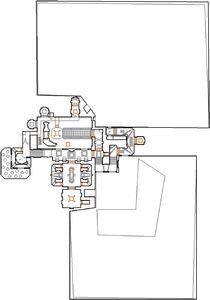 Map of Research Complex
Letters in italics refer to marked spots on the map. Sector, thing, and linedef numbers in boldface are secrets which count toward the end-of-level tally.