MAP06: Revival is the sixth map of Hell Revealed II. It was designed by Mike Watson and uses the music track "Dance of Death" by Sam Woodman. 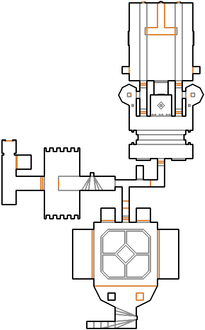 Map of Revival
Letters in italics refer to marked spots on the map. Sector, thing, and linedef numbers in boldface are secrets which count toward the end-of-level tally.

You will have to tangle with a demon at the start. Get the shotgun and supplies in the big room, but you will have to deal with a large imp ambush. Open the next door and go right at the fork, looking out for a baron ambush as you go. The next room you come to has barons of Hell and shotgun guys, as well as two doors. You will also see the yellow keycard in this room. Take either door, then open the next door to appear on one of two bridges. There are lost souls in this area, so be extra careful not to fall here. Flip one switch and then go back to the yellow key room and take the door you did not take before, flipping the switch at the end of that path. The switch on the left lowers barriers to the yellow key and reveals another switch, while the switch on the right raises a bridge so you can access the new switch. When you flip the center switch, you will lower the yellow key, but also reveal yourself to a cyberdemon. Dispose of him as necessary, then grab the yellow key and then return to the fork. Go west this time, and press the lion switch. You will be surrounded by cacodemons and pain elementals, kill them and open the next door. In the next hall, kill the shotgun guys, and revenants will wake up, opening a wall to the right where you can pick up the blue keycard. Press the nearby satyr switch to reveal the exit in the starting room, then use the blue key and head back there. You might find arch-viles, and possibly some resurrected imps, so kill them as necessary then exit.

From the south, the blue door can only be opened once. In cooperative multiplayer, once the door closes, any player south of the door will become trapped. If every player on the other side of the door dies and respawns, it will become impossible to finish the level.

At the north of the level, the teleporters in the nukage pits, rather than rescuing you from damage, will warp you into the larger nukage pit, killing you if you teleported at low health, or if the metal bridge has not been raised yet.