MAP06: Sewers is the sixth map visited in Strife. It uses the music track "Darker".

Having weakened the defences around the Order's castle, the Strifeguy is tasked with destroying the controls for its gate mechanism so the Front can launch a raid. Strifeguy is told to seek out a sewer-dweller called Weran, known as the "Rat King", for assistance with this task. 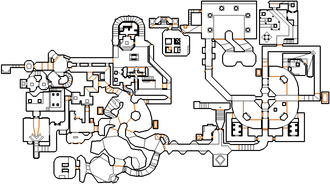 Map of Sewers
Letters in italics refer to marked spots on the map. Sector, thing, and linedef numbers in boldface are secrets.

As the level starts, a current will carry you down the steps in front of you to a long drop. Just before this you will see an opening on the left; go in here and follow the steps down to a lift; press the switch on the south wall to lower the lift and avoid a damaging fall. Cross the green water here to a stone ledge and go east up the staircase and through a door. Kill both acolytes here; the red acolyte will drop a gold ID card that can be used to open a room with a grenade launcher elsewhere in the level. Press the button next to the red acolyte to open the way forward, then go down the staircase again to find that two doors have opened to the east. Go through the right-hand door.

Beyond this point, much of the level is poisonous; if you have an environmental suit in your inventory, select it so it can be activated when your level of toxicity gets too high. Go forward and head into the opening on the right, then go south up the steps and through the door straight ahead. Lower the lift behind the door and ride it up to a stone passage, then go forward to the door ahead of you. In the next room, kill the red acolyte (who drops another ID card) and throw the switch in the north-west corner to open a metal wall just outside.

Leave the room and go through the metal wall you just open. Follow the passage and turn right to find the sewer mutants' hideout just ahead. Go through here until you reach a small fountain, then turn right to see a door in the south-west corner of the hideout. Go through and climb the stairs to speak to Weran.

Getting the guard uniform

Before he will help you, Weran asks you to obtain a guard uniform so his followers can get food from the surface. Leave the hideout and retrace your steps to the room where you found the large metal wall. Go north down the passage and head back down the lift and through the door, then turn left and go through another door. Lower the lift behind this door and ride it up, then turn left and head down the passage. When it curves to the right, press the button on your right to raise a bridge in the next room. Follow the passage until you reach a bar blocking your way, and press the button next to it to open it. Cross the bridge, turn right, go up the steps and follow the walkway around the sewage pool. Take the stairs here to return briefly to town.

Open the door, and you will arrive in a room with a green acolyte. Kill him and take the guard uniform he drops, then press the button on the wall to open the exit (remember this area, you will need to return here when your mission in the sewers is complete). Go back down the stairs to return to the previous area, then backtrack through the rooms you passed through earlier to return to the mutants' hideout, and go back to Weran's room.

To the reclamation tank

Talk to Weran again and give him the guard uniform; he will give you some flamethrower parts in exchange and tell you that Irale can turn them into a working weapon for you. He will explain that to reach the castle's gate mechanism, you must enter the castle via a maintenance gate and then drain the reclamation tank to enter a hidden part of the sewers where the mechanism is located. Weran also opens some passages to make your journey easier.

Leave Weran's room and head straight forward to a wall that has now opened. Go down the staircase and then straight forward to a stone ledge leading to another set of steps. Climb up and head east down the tunnel, watching out for the sentinels on either side. When the tunnel opens into another room, turn left and head through the door on your left. Dispatch the acolyte in the next room and press the button by the window to open a door just outside - this is the maintenance gate Weran mentioned. Go through the gate and head upstairs to enter the castle's waste disposal area.

After getting back into the sewers from the castle's reclamation tank, go through either tunnel into a pillared room then leave by a tunnel in the south-west corner. Follow the path through a cross-shaped area into a brick corridor, and keep going until you see a large silver door on your right. Go through this door and follow the walkway through the water pool to a small chamber with a valve. Turn the valve and then retrace your steps back to the pillared room.

When you return to the room, look west to see that the water level has risen in a pit, allowing you to cross it to a small door. Go through and press the switch just on your right to open the bars next to it. Jump into the passage behind the bars and follow it to a lift, then ride the lift up. Flip the switch ahead to expose the gate control and destroy it with any weapon. Go forward past the control and take another lift down, then press the button to open a door out of the passage.

To leave the sewers, you need to return to the room where you obtained the guard uniform. Backtrack to the pillared room and head down the tunnel you used earlier; several alcoves have opened to reveal sentinels. Clear them out and then approach the bars blocking the tunnel exit - press the button next to the bars to raise them. Follow the cross-shaped passage all the way until you find your path blocked by a wall with a button, then press this button to lower the wall and clear the way. Go forward and open the silver door ahead.

Climb the stairs behind the door, watching out for a wall on your left which opens to release one or two stalkers as well as some supplies. Head west down the sewage tunnel and drop off the edge, then go up the staircase on your left to return to the mutants' hideout. Head north from here back into the sewage and turn left, then jump up the ledge ahead. Go north down the passage and head down the lift and through the door ahead, then turn left and go through another door. Lower the lift behind this door and ride it up, then turn left and head down the passage, watching out for one or two stalkers which emerge from an alcove ahead. Follow the passage to a sewer stream, turn right and cross the bridge ahead. In the next room, turn right to climb the steps and follow the walkway round the sewage pool. Climb the staircase ahead to get back to the surface.

Early in the level, you can kill a red acolyte and take the gold ID card he drops - this item is used to open a storage area containing a grenade launcher elsewhere in the level. After killing the acolyte, press the button next to him to open two doors in the previous room. Head down the staircase to the east into a pool of sewage, then go through the northern door and head east down the tunnel, activating an environmental suit to avoid being poisoned by the toxic floor. As you exit the tunnel, turn left and climb the staircase ahead, then turn right at the top to go through a door marked "Storage". Kill the acolyte on guard, then press use on the card reader here to open the door next to it. The storage room contains three medical kits, two crates of missiles, two environmental suits and two piles of high-explosive grenades. Use the card reader in the north-east corner of this room to open some bars, behind which you will find the grenade launcher.

The teleport map spots 1 through 4 (Things 107, 109, 108 and 110) have no skill flags set either, but because of special handling in the engine, they function normally in the level.

It is possible to collect the guard uniform before Weran has asked you to do so, which is one of several possible sequence breaks in Strife. Collecting the uniform first reduces the amount of backtracking in this level.