MAP06: Shipwreck is the sixth map of Doom 2 Unleashed. It was designed by aaglo and uses the music track "Into Sandy's City" by Robert Prince.

When using the music WAD included with this megawad, this level instead uses the music track "Ica-Rusher" by Paul Corfiatis. 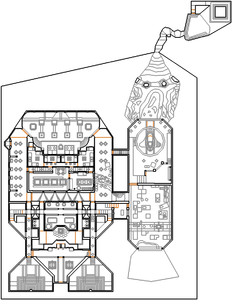 Map of Shipwreck
Letters in italics refer to marked spots on the map. Sector, thing, and linedef numbers in boldface are secrets which count toward the end-of-level tally.

When you start the level, open the automap to see that the outlines of important areas and corridors have already been revealed. You can use this to help you navigate the ship.

Turn left and go down the curved steps, then turn left again at the bottom and go through the tan door. Follow the corridor past some zombies and turn left at the end, then go through the larger silver door to a passage guarded by demons and go through another silver door in the wall on your right. Follow the passage and turn left at the end to see the blue keycard on a step ahead - when you approach it a number of zombiemen, shotgun guys and chaingunners will teleport into the room. Step back into the narrow passage to avoid being surrounded, then grab the blue key when the way is clear.

Backtrack through the large silver door and go through a smaller door to the south. Follow the passage until you reach two radiation signs, then open the sign on your left which has blue key markings. Kill the imps and chaingunners in this area, flip both switches in the north wall to open a radiation sign behind you, then walk into the narrow passage that is revealed and take the partial invisibility at the end (the switch behind it just brightens the surrounding walls when pressed). Go back through the blue door and turn right to see that a doorway has opened in the left-hand wall - head through it and follow the stairs down, then follow the narrow passage east past imps and zombiemen until you reach another staircase going up. Ignore it, and instead take the chaingun here then go through the silver door to the left, heading straight forward through another door to reach a cargo room.

Make your way to the north-east corner of the room, watching out for imps and zombies hiding behind the crates, then climb on top of the cross-shaped stack of crates; from here you can follow the crates south until you reach the red keycard sitting on top of a crane. Drop to the floor and go to the north-west corner of the room to find a berserk pack and a door with red key markings. Open the door and kill the demons waiting behind it, then step through and turn right to kill the imps and shotgun guys at the top of the steps. Go up the steps and turn round to see a switch, which will open the large column in the room to reveal a shuttle guarded by several monsters. Climb into the cockpit of the shuttle to find a megaarmor, then press both switches here to open the north wall and raise a pair of bars that you can step over to reach the wall opening.

Go outside and kill the waiting imps, along with one to three barons of Hell waiting between the columns ahead. Climb the steps to a narrow tunnel and follow it to an area with a gray tower, then turn left and head through the exit door to finish the level.

From the start, go through the west door. You will see a small silver door with an exit sign in front of you - go through it to enter an airlock with an armor pickup and an armor bonus.

From the previous point, leave the airlock and look at the east wall to see another silver door. Go through it to find a staircase with doors at the top and bottom - the top door leads to a mess hall with a supercharge, and you can go through to the kitchen to find a chainsaw. The bottom door leads to sleeping quarters, two of which contain shotguns.

In the passage where you encounter the first demons, head all the way east and open the large silver door at the end. Ahead you will see a destroyed lift with imps guarding a rocket launcher.

Next to the radiation sign requiring the blue key to open is a second sign - open it to find a chamber with a pyramid-like structure, which inflicts damage while you are standing near it. A megaarmor can be found in the south-east corner of the chamber.

After going downstairs and following the passage that connects the west and east sides of the ship, you will come to a room with imps and zombiemen. Behind the zombiemen are a super shotgun and a box of shotgun shells under crushers.

While standing on the crate holding the red keycard, you can run south to land in a hollow crate containing a supercharge.

* The vertex count without the effect of node building is 5169.