MAP06: Sinkhole Showdown is the sixth map of Ancient Aliens. It was designed by Paul DeBruyne (skillsaw) and uses the music track "Roof," composed by Stuart Rynn (stewboy). The par time is 3:30. 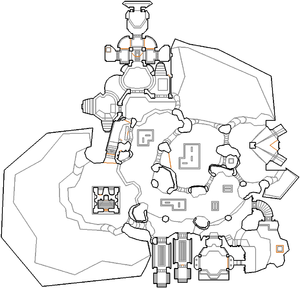 Map of Sinkhole Showdown
Letters in italics refer to marked spots on the map. Sector, thing, and linedef numbers in boldface are secrets which count toward the end-of-level tally.

You start out in a small area with some supplies and a shotgun. Grabbing the shotgun will drop the floor and reveal the first arena. Numerous shotgunners surround you, with a few imps on overlooking ledges. To the east is the super shotgun and red key. Acquiring the latter will open numerous closets and walls around the arena, including four revenants nearby and a horde of imps and demons. Two sets of stairs opened to the southeast. One leads to a berserk but will spawn a revenant, the other to the rocket launcher but will trap you with a mancubus in front of you and sets of imps on either side.

Pressing the red switch in the northwestern corner of the arena will drop the floor again, revealing more monsters including two archviles. The blue key is in a nook on the south end, and will allow use of an elevator north of the red key switch. At the top, go north (as the south door needs the yellow key). Fight off more shotgunners and an arachnotron after climbing a set of stairs, then press a button nearby to reveal a chaingun and the yellow key. Picking up the key will drop you into an ambush, starting with some lower-tier enemies and eventually revealing an archvile, a mancubus, and a pair of chaingunners. Enter the teleporter where the mancubus emerged from to exit the pit. Head back to the yellow door and around the structure to find the exit.

* The vertex count without the effect of node building is 3161.