Unchecked
This level occupies the map slot MAP06. For other maps which occupy this slot, see Category:MAP06.

Map06: Sorority of Pain is the sixth map of Project Einherjar, designed by Impie in 2016 and constructed in Doom Builder 2. 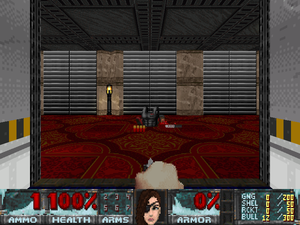 The start point. Ahead is the gate to the garden.

Gaul's security center is divided into the Beauty and Beast wings. Juno begins in the elevator bank of the Beauty wing: a lavish administration center with marble walls and carpeted floors. Troops assault her from all sides once the shooting starts, including a patrolling Einherjar in the grand hall, and a second wave of troops that arrive in the elevators. Clear the Beauty Wing of enemies and items before venturing south to the Beast wing.

The Beast wing is a sprawling dungeon: the first thing you come across are two gruesome interrogation rooms and a large gray cell block lined with prison cells. Past the interrogation rooms and to the left is the door to the storage facility and another cell block, at the end of which is the armory (locked behind a yellow door) and the switch that opens the way to the generator outside. Turning off the generator opens all the cell doors in both cell blocks: the middle cell of the second cell block contains the blue key. Take it back to the Beauty wing and open the blue northern door: kill the Einherjar and its Juggernaut escort and enter the meeting room to trigger a huge shootout and another wave of troops appearing from the elevator banks. Collect the red key from the meeting room and use it to open the exit door. After killing the highly aggressive Dory Vargstein, Juno can reach the exit switch.

Skuld guards the yellow armory key, and defeating her is not required to exit the level. However, the armory does contain a ton of useful weapons and supplies. To reach Skuld, after opening the cells, return to the first cell block and climb the staircase to the control towers you saw when you first entered the Beast wing. Hit the switch in the left tower and return to the cell block: the locked purple gate has opened, and Skuld is just beyond.

Skuld's missile attack is devastating. You may want to avoid triggering the Fratboy ambush in this area until after Skuld's room has been unlocked, as they make for nice expendable armor.