MAP06: Steak streak is the sixth map in the DMP2013B.wad mapset of Doomworld Mega Project 2013. It was designed by Ilya Lazarev (joe-ilya) and uses the music track "Deep into the Code," originally composed by Robert Prince for Doom. 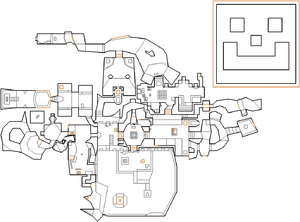 Map of Steak streak
Letters in italics refer to marked spots on the map. Sector, thing, and linedef numbers in boldface are secrets which count toward the end-of-level tally.

Climb down the catwalk, grab the ammo from the pedestal and open the door. Go behind the fountain and push the switch to open the left door, step into the little garden, grab the chaingun in the skull pit and creep into the cave that leads to a prison cell. Go through the Shawshank-esque carpet on the wall, get out of the cell into the main corridor the climb the stairs to push a switch that indicates that stairs have been risen somewhere. Backtrack to the little garden to climb the new stairs that lead onto the wall, get there and jump into the little flesh alcove with a sunken switch in lava.

Push the button to raise the metal pedestal, get back onto the wall and proceed to jump onto said pedestal and run through the damaging little tunnel crack and hop into the other side of the wall. Take the rocket launcher from the teeth pedestal and lower the two metallic bars to get into a cave. Turn left and get upstairs to push a switch behind a red rock, the switch opens up the door in the cave. Behind the door push a switch that rises and indicates that the taller metal bar in the outdoor area you've just been in. Climb it up and push the button, it reveals another metallic lift to the far side outdoors. Get up there and maneuver above the catwalks and jump into the teleporter at the end. Quickly run through the blood river, take the yellow skullkey on the face pedestal and rush back to the cliff.

To the right there's a green marble brick with an antenna (it's an indicator towards a switch later on). Turn left and get into the far cave and hop down from the metal bar and open the door. Get behind it and turn right to push a button in the lava pit that opens a white rock near the door you just went through. Get into the new room it opened up and climb up the metal lift, head towards the switch that then reveals a trap behind it that has another switch in it. It lowers the green marble brick with the antenna you saw not too long ago.

Get back to it and open the door to the left that leads you to a little lobby, turn there left towards the rock band. There's a switch there behind a wall near the bass guitar (the one on the right). Open its eye, it will lower the red skull key behind the changing room to the opposite side of the room. Take it and backtrack a little to the red door behind the marble antenna brick. Go down the winding tunnel and head towards the lava river.

You can eat the steak behind the yellow door by pressing 'use' in front of it, it will grant you a berserk pack.

It's possible to break this map in multiplayer mode if one player lowered the tall metal bar that has to rise higher when a certain button is pushed and if a different player would push said button just as the metal bar is fully lowered by the first player.

* The vertex count without the effect of node building is 1692.

The inspiration is coming from the main theme of Inferno from Doom and little touches of Doom II's main earth theme. The map itself was made via Doom Builder 2, TimeOfDeath later pasted his Sky Transfer smiley outside the map so that the hellish sky will only show up on this particular level, as this was first submitted at the MAP21 slot.