MAP06: Survival Instincts is the sixth map of Community Chest 4. It was designed by Adam Windsor and uses "Into Sandy's City," a music track from Doom II by Robert Prince. It was the first level Windsor designed for a PWAD since his contributions to 2000's The Darkening Episode 2, and his first contribution to a PWAD since his portion of MAP12: Entropy in 2002's Alien Vendetta. 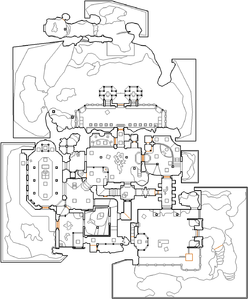 Map of Survival Instincts
Letters in italics refer to marked spots on the map. Sector, thing, and linedef numbers in boldface are secrets which count toward the end-of-level tally.

You begin in a sheltered rock area. If playing from a pistol start, you may wish to use secret #1 now to collect a shotgun, so that you don't have to go through the trouble of killing a shotgun guy with your pistol. Head east and kill an imp on a nearby rock ledge, then head south to enter a large outdoor area in front of a brick fortress. The outdoor area and the ramparts of the fortress are teeming with your usual cannon fodder of zombiemen, shotgun guys and imps, which you should be familiar with handling. However, there are also a couple of priority threats - notably, each turret of the fortress has a chaingunner (not present on hey, not too rough and below). Clear out the area and make a beeline for the entrance to the fortress, then open the door.

You are now in the front courtyard of the fortress. Watch for up to 12 imps on the surrounding ledges, as well as four imps and two demons on the courtyard floor. There is also a chaingunner on a nearby crate that you have to watch out for - kill it, then use the stairs in the west to get up onto the ledge, where you can jump to the crate and collect the chaingun. Once ready, open the door in the south to enter the fortress.

When you open the door, you are immediately greeted by a Hell knight. Kill it, then proceed forward to enter a large room with a hole in the ceiling and fragments of roof on the floor. For brevity, we will call this room the "entrance room". Here, you will find yourself in a nasty crossfire:

You may wish to use the door in the west of the previous corridor to enter the room behind the window in the northwest. From there, you can funnel enemies towards the window and mow them down with chaingun fire. Alternatively, the northeast of the room is relatively safe, and you can set up your foothold there. With the good number of hitscan monsters, monster infighting is a good idea.

The door in the east of the entrance room is marked "locked", and you can't open it. Your goal is to reach the caged area in the southwest and flip the switch to unlock this door.

First, head west and kill the two imps and one shotgun guy in the next rectangular room. Up to two more imps may also emerge from the stone area in the northwest - no big deal. Continue west into a large hall with a bigger threat - up to 10 imps and a caged baron of Hell (Hell knight on Hey, not too rough and below) in the north. Four cacodemons (two on Hey, not too rough and below) will also be awakened, approaching from the windows in the west. Grab the armor in the middle of this room if you need it, then go to town on the monsters.

Facing north, jump out of the northernmost window in the west to collect a rocket launcher and get the ambush on the chaingunner lying in wait (and not vice versa). Head south along this ledge and test out your rocket launcher on the imps in the platform in the southwest. Open the door at the end of the ledge and proceed forward.

At this point, a large teleport trap will be activated, re-populating the level with enemies. This is on top of any enemies that placed later in the level. There are four "lances" of enemies, and the enemies in each "lance" will teleport into different parts of the level. Each "lance" consists of:

Each lance will teleport in as follows:

The area ahead is teeming with shotgun guys and imps. First, kill the chaingunner in the southeast of the room just after the ledge and get moving before the monsters in lance 1 open the door behind you and attack you from behind. Head east to the room with the soulsphere and grab it, watching for the shotgun guys, zombiemen and monsters from lance 3 approaching from the east. Head out through the eastern doorway and make a left turn (north), then follow the corridor into a rectangular room with two square lights and a platform with a Hell knight in the north. You will also have three imps and two shotgun guys here to deal with, as well as the whole of lance 2. Head up the steps in the northeast to the caged area you saw earlier and flip the switch in the corner to unlock the locked door. Snipe the monsters from lance 4 here.

You can quickly return to the entrance room by heading south, flipping the switch on the wall in the L-shaped corridor to raise the bars and heading down into the square room with the chainsaw (watch for two imps). From there, head north and you will be back in the entrance room.

Back in the entrance room, head through the now unlocked door in the east. This takes you to a room with a pedestal and a curved cage high on the wall. Watch for imps and a Hell knight (not on Hey, not too rough and below) in the cage, as well as two zombiemen in the southwest. You will also find some monsters from lance 3 and lance 4 in the cage and on the ground respectively. Clear them out, then head through the door in the south.

When you fire a shot, you will find that you have an additional problem to worry about - cacodemons. Up to seven of them will appear from behind the walls of the courtyard and begin closing in on your position. With so many different monster types in the fray, it is time to start some major infighting and use your rocket launcher.

Once the coast is clear, lower the metal block in the southeast of the courtyard and ride it up. Head west along the ledge to its end, face north and run into the turret with the red key. make your way down the steps in the west (watch for a shotgun guy) and return to the courtyard.

Open the exit door in the east with your red key. Head down the path. Once you cross between the two green torches, the level ends.

Collecting the super shotgun at the entrance to the fortress

To collect the super shotgun, head to the western side of the entrance courtyard and climb up the stairs to the ledge. Head into the western turret, face east and run across. You will step on top of the pole in the middle of the entrance to the fortress courtyard and make the jump into the eastern turret, where you can collect the super shotgun. Flip the switch in the south to open the bars and exit the turret.

* The vertex count without the effect of node building is 4243.

The locked door in the east of the entrance hall cannot be opened initially, yet must be opened manually once it is unlocked by the switch panel. This is achieved by exploiting the property of doors to open to eight units lower than the lowest adjacent ceiling.

The lock/unlock signs are also easily executed - the "locked" sign is actually the upper texture of a thin lowered sector in the alcove for the signs. The unlock switch that opens the door sector behind the locked door also raises these thin lowered sectors, displaying the "unlocked" texture on the wall behind.