MAP06: Temple Entryway is the sixth map of the megawad Scythe 2. It was designed by Erik Alm and uses a modified version of CBLOOD02.MID from Blood. It is the first map of the Egyptian episode, the second one in Scythe 2. 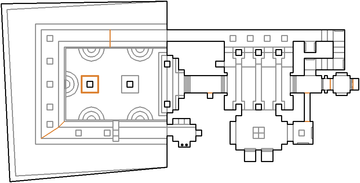 Map of Temple Entryway
Letters in italics refer to marked spots on the map. Sector numbers in boldface are secrets which count toward the end-of-level tally.

Use the berserk wisely.

At the start, face left and drop down the ledge. Turn right and move straight forward until you find a candle. Opposite the candle are some stairs so climb them. Continue straight forward and turn left at the end. Position yourself slightly to the right of the pillar, facing it, and drop down the ledge, landing on the red key platform. With the red key in hand, move towards the candle mentioned previously and you'll spot a door marked by two red torches, which is the red door. Open it to find the exit portal.

It is possible to do a well-timed strafejump from the starting ledge to the red key platform, saving a lot of time.

* The vertex count without the effect of node building is 663.