Unchecked
This level occupies the map slot MAP06. For other maps which occupy this slot, see Category:MAP06.

MAP06: Terminal Teleport is the sixth map of Nerves of Steel, designed by Impie in 2015 and constructed in Doom Builder 2.

It is the final map of Episode 1: The Cyborg Solution, and concludes the cyborg army plotline. 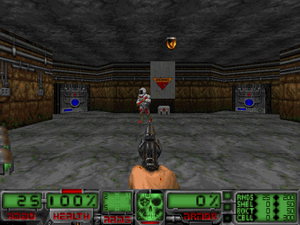 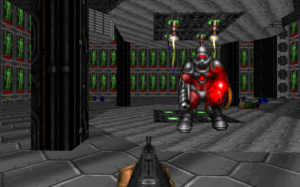 Aniki uses you as a guinea pig for his Terminator prototype.

The teleport puzzle is easily solved if you're observant (or persistent). The ceiling light color indicates which direction to take: if the light is yellow, go left, and if it's red, go right. Eventually you will be teleported into a cyber-lab...in the middle of an army of cattle prod goons, directly in front of a twin-chaingunning Goroze. Clear the room and resupply if you need to, then hit the switch to open the way to the teleporter (and a squad of goons with big guns). Be sure to save and resupply before using the teleporter.

You have only a few seconds to act when you enter the Terminator test chamber. Immediately start moving to avoid being shot by the cyborg guards, and kill them with missiles or plasma. After a few moments, the central structure opens, and out comes the Terminator. Kill it to raise the bridge to the exit.

The Terminator is slow, but has a number of advantages that more than make up for it. Its machine gun will tear you to shreds. Its blaster cannon can splatter you to pieces. It fires energy grenades that can bounce and splash, or seek and destroy. And it takes a hell of a lot of punishment before it dies.

Adding to your difficulties is the fact that you have very little room to maneuver during this fight -- falling off the edge means certain death -- and even less cover to hide behind. Only a few precious moments into the battle, the four large pillars raise into the ceiling, forcing you to rely on the scrawny pillars at the center for cover. The tiny arena also makes it extremely risky to use nuclear missiles for a quick kill: it's possible, but ill-advised.

If you take a wrong teleporter in the tele-maze, you will either be sent backward, or dropped into a bonus room filled with hungry Wraiths. There is an AA-12 Assault Shotgun in this room.

In Teleport Room #5 -- the penultimate room before the cyber-lab fight -- the wall behind your spawn point has a switch disguised as a brick. Press it for a free Plasma Repeater.