MAP06: Terminus is the sixth map of Ashes 2063. It was designed by Vostyok and uses the music track "Ghost Town" by John Weekley (PRIMEVAL). The par time defined in MAPINFO is 30 seconds. 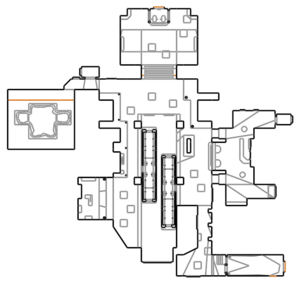 Map of Terminus
Letters in italics refer to marked spots on the map. Sector, thing, and linedef numbers in boldface are secrets which count toward the end-of-level tally.

Although not recognizable within the map itself, the map's location and proximity to other areas was intended to be analogous to the real world Five Points Marta subway station in Atlanta. In this iteration of Atlanta's rail system, however, the north and north-east red and gold rail lines were started but never completed, meaning the routes from the city South end at a terminus in the city center.