MAP06: The Gorge is the sixth map of Doom 2 the Way id Did. It was designed by Sarah Mancuso in the style of John Romero. The par time defined in the DEHACKED lump is 2:45. 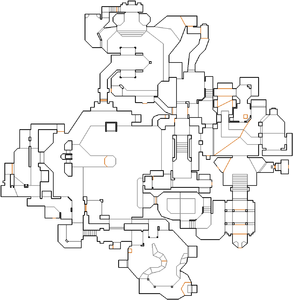 Map of The Gorge
Letters in italics refer to marked spots on the map. Sector, thing, and linedef numbers in boldface are secrets which count toward the end-of-level tally.

Head right to the bridge and grab the shotgun. Head north and lower the lift. Several traps will lower. Rise on lift and head south to enter the teleporter. In the other area, head left down the staircase. Go straight to find an alcove indicated by two lamps. Lower a lift that is also indicated by two lamps. Go along the corridor until you get the south dark room. Press the button in the alcove to get access to the blue key. Get back and walk on the freshly built bridge towards north. Go along until you drop down from the ledge. Walk on the bridge towards the blue key platform and grab the key.

Use the blue door south. Proceed east until you reach the blood cave. Walk on the rocky stairs to the south. Grab the yellow key. Beware the baron of Hell trap. Now, get back and out of the blue door. Go to the very north. Open the yellow door between two torches.

Go along the corridor and drop down to the south of the blood pool. Press the switch that raises the bridge. Walk upstairs at the north. Walk along the bridge until you get into the alcove. Head left and then upstairs. Head right to the place with ceiling lamps. Floor will go down. Go south, downstairs and quickly on the blood pool. Head left and press switch that opens a door behind you and trap right near you. Go back towards the open alcove. Press the button to lower lift and use the lift to rise. Go around the corner and open the door. Go around the inescapable blood pool. Use either alcove to go down. Go to the north eastern closet and proceed downstairs until you reach the lift between two torches. Lower the lift to find an alcove with a button inside. Press it and go back to see the northern wall open. Walk downstairs, press the switch in the west to lower eastern alcove and use this alcove to open the exit door. Kill the chaingunner and push the switch.

Two imps (Things 97 and 98) have no flags set for any of the three difficulty classes, so they do not actually appear in the level.