MAP06: The Halls Have Eyes is the primary hub map of Ghoul School 3D's second episode. It consists of McCool High School campus during a second undead apocalypse. It was designed by Mike MacDee (Impie) and uses the music track "".

Like in the first episode, ghosts periodically spawn on the map to reanimate monsters and re-populate the map. 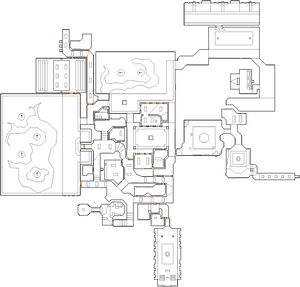 Map of The Halls Have Eyes
Letters in italics refer to marked spots on the map. Sector, thing, and linedef numbers in boldface are secrets which count toward the end-of-level tally.

Explore the campus to stock up on weapons: the campus is in the middle of a turf war between ghoulies and eyeguys. Your first major destination is the gym to the northwest, where you will find the Water gun and Dr. Femur, who explains the origin of the eyeguys and gives you the key to Prof. Mengeler's secret lab (green key).

Science Lab Take the green key to the science lab and use it on the bookcase in the science classroom to reveal a hidden switch on the time machine's dilapidated catwalk. Flipping this switch (before it disappears again) inverts the catwalk stairs and reveals the entrance to MAP08: Weird Science. The robot guarding this area carries one of the four Polyp Samples.

Library The Mana Zoop weapon will prove invaluable later, so you may as well grab it now before heading into the lab. Solve the bookcase switch puzzle starting with the switch behind the short bookcase to lower the pillar with the Mana Zoop on it - grab it before it raises again!

Yellow key in hand, the principal's office is now available. Use it to open the basement and gain access to MAP07: Dead Man Stomp. You can also give Nurse Ratchet your rivet gun for a PRU, then go back to the Hidden Lab and borrow Prof. Mengeler's Rivet gun from the inner sanctum.

* The vertex count without the effect of node building is 2060.